By Matt Lieberman: Bob Arum is predicting a stoppage either way for next month’s fight between challenger Anthony Yarde and IBF, WBC & WBO light heavyweight champion Artur Beterbiev on January 28th on ESPN+ at the Wembley Arena in London, England.

Beterbiev (18-0, 18 KOs) is seen by many as the clear favorite against the powerful but irreparably flawed WBO mandatory Yarde (23-2, 22 KOs) for their main event fight.

Although Yarde has improved since the last time he challenged for a world title against former WBO 175-lb champion Sergey Kovalev in 2019, he still looks pretty much like the same fighter that was knocked out by a jab by the Russian fighter three years ago.

“Absolutely, particularly to the UK,” said Top Rank promoter Bob Arum to Boxing Social about bringing different fighters like Artur Beterbiev to the UK to fight. “The UK is taking over, in a good way, the sport of boxing because the fan interest in the UK surpasses any place in the world.

NEWS:   Yarde was ahead of Beterbiev on 2 scorecards at time of stoppage

“You’re in with Yarde, who punches very well, and Beterbiev has been down a number of times in his career. So the fight can end either way. One thing I guarantee you, it ends by stoppage. 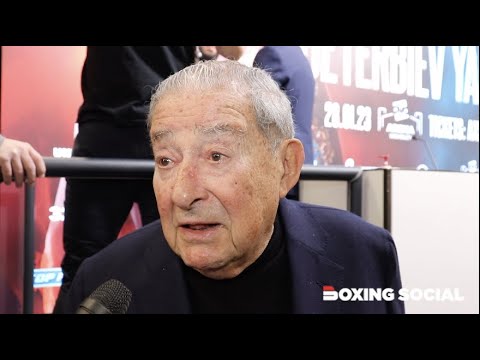 “If I could say money and not have judges for the fight, I would be very happy,” said Arum.

It’ll be difficult for Yarde to go the full 12 rounds with Beterbeiv if his chin and stamina haven’t improved since his loss to Kovalev. Yarde hasn’t faced a big puncher since the Kovalev fight, so you can’t know if he’s improved in the last three years.

If Yarde had beaten a high-caliber fighter like Joshua Buatsi, Craig Richards, or Callum Smith in the last three years, it would be easier to take him seriously as a credible threat to Beterbiev.

Defeating the likes Koykov, Arthur, Theran, Spelman, and Ramirez aren’t good enough names to view Yarde as anything but another knockout victim for Beterbiev.

“I don’t think, realistically, we’re going to be able to do that undisputed, assuming Artur keeps winning until probably the latter part of next year,” said Arum about the undisputed match between Beterbiev and WBA light heavyweight champion Dmitry Bivol.

“There’s Callum Smith, who is a mandatory from another organization [WBC], and we’ll do that fight. If Bivol gets through, then we’ll do a fight against Bivol. “Economics may be different from place to place, but the ring is the same.

“Artur us a traveler. He lives in Canada now. He has a permanent resident in French Canada, now in Montreal. So wherever the best place for that fight, we’ll do. I don’t care. The ring is the same,” Arum said about the Beterbiev vs. Bivol match.

“So to bring Beterbiev over here in London to fight on January 28th is a terrific, terrific thing, and I think everybody will be pleased with the fight.

“Particularly dealing with Queensbury. I’ve known Frank [Warren] for ages, and then we started promoting Tyson Fury together.

“It’s been a good relationship, and that has turned into Queensbury doing a lot of fights here that we buy the rights to show in the United States on ESPN, so it’s been a great relationship.

“Land the right punch,” said Arum when asked what Yarde can bring that Beterbiev might not be able to deal with. “If I’m coaching Anthony Yarde, I would say, Be patient.

“When Beterbiev opens up, throw your punch and land your punch because you yourself also are a devastating puncher,” said Arum.