By Adam Baskin: Teofimo Lopez kind of lost it today when reminded in an interview that WBC light welterweight champion Regis Prograis said that he’ll put him in the hospital.

Prograis wants to add the four unified 135-lb champion Teofimo’s scalp to his resume. This weekend, Teofimo’s fight with Martin is a WBC light welterweight title eliminator. However, Teofimo says he prefers a title shot against WBO 140-lb champion Josh Taylor rather than Prograis.

You can’t blame Teofimo for going in the path of least resistance because Taylor looks shot at this point and not the guy he used to be.

Teofimo (17-1, 13 KOs), who has a habit of embellishing his credentials by calling himself a former undisputed lightweight champion, says he’s “ready to go to the morgue” in a fight against Prograis (28-1, 24 KOs).

Whether the two fighters ever face each other is unknown because Teofimo might get picked off well before that, starting with his main event fight against Sandor Martin (40-2, 13 KOs) this Saturday night, December 10th, on ESPN+ at Madison Square Garden in New York.

The fact that Top Rank is putting Teofimo in with another tune-up-level opponent rather than one of the elite guys means they don’t know if he’s going to cut the mustard at 140.

If Teofimo struggles against Martin and loses, his last chance will be to go up to 147 because he can’t go back down to 135 because he’s too huge. Putting Teofimo in with Sandor Martin is a way for Top Rank to test whether he will go anywhere in the light welterweight division.

\Losing this fight means it’ll be a waste of time for Top Rank to keep Teofimo at 140. They can either move Teofimo up to 147 or wash their hands of him and view him as a flash in the pan.

That’s going to be a tough one for the 25-year-old Teofimo because Sandor brings a lot of the same elements to the ring as George Kambosos Jr. Teofimo lost to Kambosos by a 12 round decision and wanted no part of a rematch, even when the Aussie was ready to give it to him.

“It’s not difficult. I’ve been in the sport for 21 years, and I’ve faced the best fighter and one of the smartest guys as a southpaw in Vasily Lomachenko. Look what I did to him,” said Teofimo Lopez to Fight Hub TV when asked if the southpaw Sandor Martin will give him problems.

Right now, Teofimo should stay far away from Prograis because he doesn’t have the talent or the experience yet to deal with the 33-year-old.

If Teofimo waits four or five years until Prograis ages and is near 40, he’s got a chance of beating him. But if they fight now, Prograis will likely finish the job Kambosos started. Teofimo doesn’t handle adversity well and reacts poorly when backed up by his opponents.

“No matter who is in front of me, I’m going to beat them,” said Teofimo. “I’m going to find a way. Regis Prograis, you’re going to get this work. Don’t worry about it. It’s all about being focused on Sandor Martin. 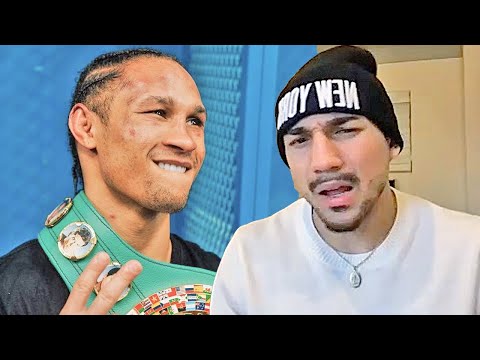 “My team did, my father did,” said Teofimo when asked if he watched Prograis’ recent fight against Jose Zepeda. “Did I want to watch the fight? I did. That’s exactly how I expected it to be.

“How do I become a two-time undisputed champion? It’s interesting. How are these guys world champions and they’re calling me out? I’m not even a world champion in this division yet, but I will be.

“You’re in my division now. It’s competition and currency. How are you going to say you’re going to put me in the hospital? I get it. It’s terms, but I almost lost my life last year because of that.

“It’s off the table. If someone has to go, it’s not going to be me. If you’re going to talk your s**t, know what you’re talking before you talk it.

“I nearly lost my life because of that. For what? Because of the fans? Nah, it don’t work that way no more. But if you want to apologize, go ahead. Then we could figure things out differently. But until then, it ain’t not friendship,” said Teofimo.

I hope Teofimo doesn’t hold his breath waiting for Prograis to apologize and grovel for saying he’d put him in the hospital because I don’t think he will take back what he said.

If the apology is a condition for Prograis getting a fight against Teofimo, then maybe he might do it in that case. But like I said, Teofimo may get picked off well before he gets to the stage of challenging for a world title at 140 against Prograis.

Teofimo’s loss to Kambosos wasn’t an accident. He lost because he’s a flawed fighter, and he would have been beaten by Vasyl Lomachenko if that guy wasn’t injured.

“Anyone at 140, I don’t care who you are,” said Teofimo. “You are in my division. If you want to take me to the morgue, I’m ready to go to the morgue. I’m ready. I don’t got nothing to lose.

“I lost everything, and I still gained it all back. So did I really lose? I don’t need these guys. They need me. That’s a fact. Do you know why these guys are so mad? If you guys need help in how to talk to the camera, I can help you. I’ve got notes.

“I’ve got gems that I write on. I have scriptures here. I could teach these guys the game and how to carry so they have sponsors right behind them. But right now, I have a job and objectives to do, and that’s to become a two-time undisputed world champion and in two different divisions.

“I’m not overlooking Sandor Martin. This guy has 40 wins and two losses. He’s not a big puncher, but he finds a way to win. He’s from Spain, the #1 guy in Spain and Europe, all of Europe, really.

“I’m looking forward to putting on a show and showing him ‘good job beating Mikey Garcia, but you’re in a whole another dog mess with me.

“It’s also leading by example. How do I lead by example? By showing that I want to be heard. I don’t want them to listen to me anymore. The only way it’s going to be heard is when I hurt Sandor Martin on December 10th, and it’s all lights out for him.

“Who tops it off? Teofimo Lopez, the takeover. The leader of this new generation,” said Teofimo about Top Rank’s card this Saturday night on ESPN+. “This is how we close out the year. This is Top Rank, this is boxing,” said Prograis.