By Barry Holbrook: Tyson Fury is using cruiserweight / bridgerweight Alen Babic to assist him in his preparation against gatekeeper Derek Chisora for their December 3rd fight on BT Sport Box Office at Tottenham Hotspurs Stadium in London.

It’s possible that Fury’s reasoning for using the smallish Babic as one of his sparring partners is that he utilizes the same high-pressure style that the 38-year-old Chisora uses in his fights.

As Babic puts it, Fury is helping out an old friend by giving Chisora a fight and a big payday. Babic sees Fury-Chisora III as a “fan-friendly” fight that will be entertaining.

It’s quite possible that the fight will be a slow sparring match in which Fury takes it easy on Chisora to avoid hurting him and to make sure the fans at Tottenham see them battle at half speed for 12 rounds.

At this stage in Chisora’s career, he’s become very slow with his movements, and it should be an easy fight for Fury.

“Tyson Fury is on the top of my list, and I’m really glad I caught him at the end of his career,” said Alen Babic to Secondsout about his happiness of getting the opportunity to work as one of WBC heavyweight champion Tyson Fury’s sparring partners to help him prepare for his title defense against Derek Chisora on December 3rd.

Tyson Fury sparring with Alen Babic to prepare for his trilogy fight vs Derek Chisora on Dec 3rd… pic.twitter.com/7lzRKtywkV

Every single guy that says something negative about the fight is going to watch the fight” said Babic about Fury’s title defense against the journeyman Chisora.

“That is a fight between two personas; Two guys that are the best that they do. I don’t think we’re going to see so much of boxing and skills. I think it’s more of a fan-friendly fight. It doesn’t have to be important for every single fight of his career.

“I think this is a fight for the fans, for himself. He doesn’t need more money,” Babic said of Fury. “He misses fighting. So who do you call? Derek Chisora. It’s the perfect fight, and Derek Chisora is always up for a challenge.

“He got this beautiful apartment for me. It’s mind-blowing for him. I like him; I like Tyson Fury. Derek Chisora and Tyson Fury are right there in the top five that I like to watch. So, of course, I’m going to watch it,” said Babic. 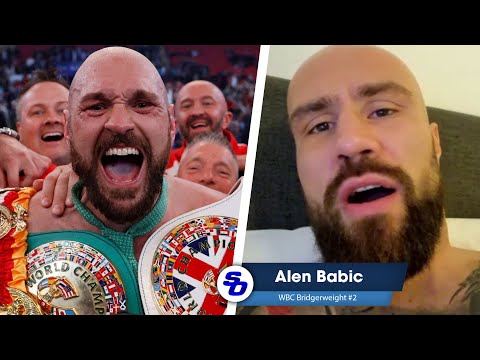