By Charles Brun: Oleksandr Usyk says he doesn’t want to hurt Tyson Fury when or if the two meet next year for the undisputed heavyweight championship.

Rather than go for the knockout, the much smaller IBF, WBA & WBO champion plans to outbox WBC champion Fury (32-0-1, 23 KOs) to win a decision.

The fight would be like a ‘David vs. Goliath’ type of match-up in which the tiny 220+ lb Usyk attempts to defeat the giant ogre Fury to become a four-belt champion at heavyweight.

Usyk will use his speed, mobility, and sharp punching to slay the giant, defeating the 6’9″ mammoth-sized Fury as he did against the quicker and far more athletic Anthony Joshua.

Fury will likely come into the contest in the 260s and attempt to utilize his size to maul & club Usyk into submission with various punches thrown at close range.

Hopefully, Fury keeps it clean and resists throwing the rabbit punches we saw him use with great effectiveness against Deontay Wilder.

With Sugarhill Steward as his trainer, Fury has changed his fighting style, going from being a boxer into a pure old-fashioned journeyman-like mauler who leans on his opponents and clubs them with short punches at close range.

It’s a lazy way of fighting, but it worked for Fury in his last three fights against Dillian Whyte and Wilder.

One can’t expect Fury to get away with that primitive 1950s style against the mobile southpaw Usyk because he’ll be on the move the entire time and won’t allow him to lazily lean on him with his huge, gargantuan frame.

“He’s a well-trained big guy; he knows what to do. It won’t be a walk, I know it, but I’m ready,” Oleksandr Usyk said to Interia about his potential undisputed clash against Tyson Fury in 2o23.

“I will do absolutely anything to win.  When I go into the ring, I never give myself a task to knock out another player,” Usyk continued. 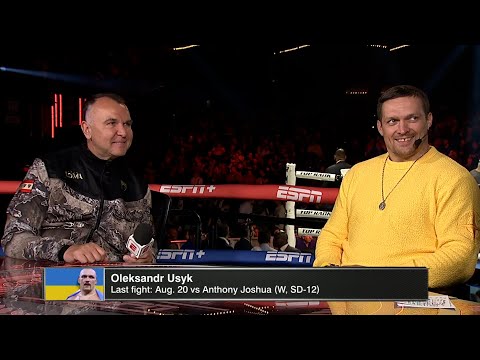 “I like to win, but I don’t want to hurt anyone,” said Usyk.

“Now, he’s running and saying, I don’t want to fight with you,” Usyk told Top Rank Boxing about Fury. “I know that,” Usyk said when asked if he believed Fury is afraid of him.

“He’s big; he’s smart; he’s dangerous and knows what to do in the ring. Yes, I want to fight with him, and we need to unify all the titles,” said Usyk.