By Adam Baskin: Former unified lightweight champion Teofimo Lopez says he was disappointed about Jose ‘Sniper’ Pedraza being selected as his next opponent for December 10th at Madison Square Garden in New York because he wanted to challenge Josh Taylor for his WBO light welterweight title.

Teofimo admits that it was his call in choosing the former two-division world champion Pedraza because his promoters at Top Rank were offering him unbeaten, highly ranked light welterweight contender Arnold Barboza (27-0, 10 KOs).

Still, he felt that fight was a “waste of time” because Barboza has never won a world title, whereas Pedraza is a former two-division world champion.

Some boxing fans believe Teofimo purposefully chose Pedraza because he’s older and looked poor against Commey and Jose Zepeda. In contrast, Barboza is young and looking very good, and he would have been a handful for Teofimo.

Teofimo, 25, felt that he was ready to challenge Taylor (19-0, 13 KOs) for his WBO light welterweight title after making his debut at 140 last August, beating unknown fighter Pedro Campa by a seventh round knockout.

“No, I was not. However, I’m not going to overlook a fighter like Jose Pedraza, but was I happy with the fight being set up at the Garden, not too much,” said Teofimo Lopez to Fighthype when asked if he was happy with being scheduled to face Jose Pedraza next with him coming off a 10 round draw against Richard Commey last August.

“I was hoping to fight [Josh] Taylor, but I knew they were making the works with Jack Catterall. Us fighters know insights way before. It was either Pedraza or [Arnold] Barboza, and I’m not trying to help Barboza when it’s a waste of my time there.

“So, I want to take the fight with a guy that was a two-time former world champion rather than someone that is trying to become one,” said Teofimo about his flimsy rationale for swerving Barboza.

“Commey seemed like he was the aggressor at one point, at one particular time. With Teofimo, we don’t believe in no draws.

“Yeah, absolutely,” said Teofimo when asked if he’s okay with going to the UK to fight WBO light welterweight champion Josh Taylor next if he successfully defends against Jack Catterall in their rematch next.

“We’ve already talked about this, and now you guys are hearing this. We’re definitely looking at next year fighting for the WBO light welterweight title along with the Ring Magazine belt in the UK, as long Josh Taylor gets the win over Catterall. Either one.

“That’s something I should have done, really,” said Teofimo when told that Taylor has already vacated his IBF, WBA & WBC 140-lb titles and now only has the WBO belt left of his original four straps.

“Honestly, no,” said Teofimo when asked if he was ticked off about Taylor vacating three of his four titles, leaving him just one strap to take from him. “As long as I have the opportunity to fight for a world title.

“As long as you get one, you’re able to get those other ones. It’s part of the journey. For all those fighters out there who say that belts don’t matter. They do. We, as fighters, don’t matter. The belts do. They’re always going to live long,” said Teofimo. 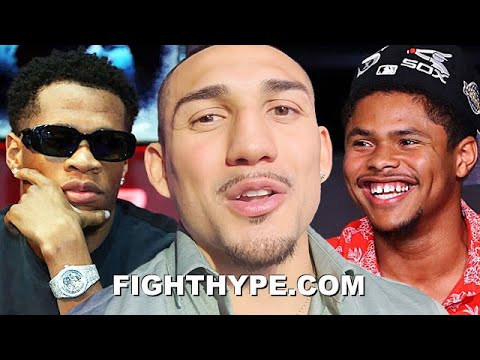 
« Canelo is an easy fight for Bivol says Victor Ortiz