By Jim Calfa: Teddy Atlas thinks Vasyl Lomachenko is in for a “tough fight” against the much bigger & younger undisputed lightweight champion Devin ‘The Dream’ Haney.

Lomachenko and Haney could meet up in the first half of next year, provided that the negotiations run smoothly. Loma told Haney & ESPN that he would need time to prepare, but he didn’t say how much time.

If Lomachenko is talking about being ready in the second half of 2023, he may miss the boat because Haney will likely have moved up to 140 by then. As it is, Haney looks too big for the 135-lb division, and it might be unsafe for him to stay in the weight class any longer.

Atlas says the 34-year-old former three-division world champion Lomachenko’s clock is ticking, and he’s going to take on one of the top fighters like the unbeaten Haney (29-0, 15 KOs), he’d better do it now.

Lomachenko (17-2, 11 KOs) looked ancient in his last fight, squeaking by Jamaine Ortiz by a 12 round unanimous decision on October 29th at Madison Square Garden in New York.

NEWS:   Shakur Stevenson says Devin Haney has no choice but fight him or vacate in 2023

The thing is, Lomachenko would have been in bad shape had the 26-year-old Jamaine not gassed out in the championship rounds because he was dominated in the first half of the bout. It was the speed, size, power, and skills of Ortiz that made Lomachenko look overmatched early on.

“As much as I love Loma, if he’s going to fight a top guy, he’d better do it right away and not wait any longer because the clock has ticked, and it’s still ticking,” said Teddy Atlas on The Fight, talking about a potential Devin Haney vs. Vasyl Lomachenko clash in 2023.

Lomachenko’s career is about to implode if he stays at 135 beyond the Haney fight because he’s too small and old to mix it with the likes of Gervonta ‘Tank’ Davis, Shakur Stevenson, Michel Rivera, Frank Martin, and Keyshawn Davis.

Those guys are arguably the top fighters in the lightweight division, and they’re all young, large, and faster than Lomachenko. What Lomachenko should do is move back down to 130 or preferably to 126 if he loses to Haney next year.

Even if Lomachenko beats Haney, he should still move back down in weight because he’s too small for the 135-lb division. If Lomachenko stays at lightweight, he will watch his career disappear with him losing to all the top lions.

“Did you see the size difference when Haney got in the ring with Lomachenko?” said Ken Rideout, the sidekick of Atlas. “Lomachenko even looked at him and said, ‘You’re a lightweight?’ He looked huge. He has to be 170 pounds. He looked like a freakin giant next to Lomachenko. Even Lomachenko commented.”

“I know he’s bigger,” said Atlas. “Everyone is bigger than Lomachenko. Lomachenko started at featherweight, went to junior lightweight, and then to lightweight, so let’s not forget that.”

“I know, but how big did Haney look?” said Rideout.

Haney literally looked like a rehydrated middleweight standing next to Lomachenko inside the ring. Fighters like WBC middleweight champion Jermall Charlo rehydrate to the 170+ region for his fights. Except for his lack of height & power, Haney would be right at home sharing the ring with Jermall at middleweight.

“Haney, for a skeleton, had a lot of meat on those bones, there’s no doubt about it, and he is bigger,” said Atlas. “Listen, he’s good, and he believes.

“He will be finding out late in the fight. He already knows late in the fight of what he has to do and what he can do, and he can rely on himself. Whereas, [Jamaine] Ortiz wasn’t sure yet, wasn’t quite cemented in that way now.

“Now, he might be, but he wasn’t then. He hadn’t had that valuable lesson yet of going through the fire. Haney knows the answers to those questions. That and besides his physical ability, besides the size, his ability to control the outside and time Loma coming in.

“That’ll be an interesting fight and a tough fight. The Tank fight would be a hell of a fight, and Ryan Garcia would, but those guys aren’t on the team. They’re not on that team.

“You know what? Fans, we’re out of luck, but Haney [vs. Lomachenko] would be nice,” said Atlas.

“Because he’s [Haney] on the right team. It’s kind of like the old days, way back in the day when the fellas ran things in the neighborhoods. If you.

“The same thing with boxing. The only difference is your stores not going to get firebombed, but a lawyer will show up at your door and hand you a piece of paper. You have to be in court on the eighth of this month. 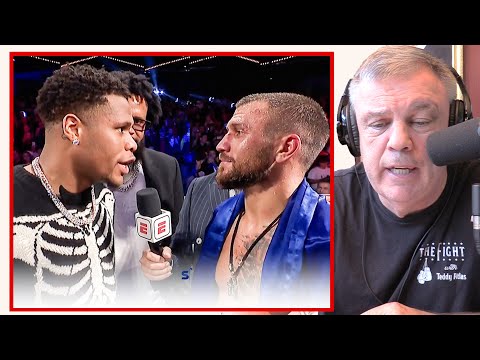 Golden Boy asks for Keith Thurman vs. Vergil Ortiz to be ordered at WBC convention »