By Adam Baskin: Shawn Porter isn’t quite sure what to make of the WBC ordering IBF/WBA/WBC welterweight champion Errol Spence to defend against Keith Thurman in his next fight.

While Porter feels that the 33-year-old former WBA/WBC 147-lb champion Thurman is a good alternative to Terence Crawford, he feels that it depends on whether he still has it in him.

Porter doesn’t respect all the inactivity that Thurman has had in the last five years since his fight with Danny Garcia in 2017. Thurman made some good money and fought only three times since that bout.

Injuries have played a part in some of Thurman’s inactivity, but you can argue that he hasn’t shown the same hunger that he once did after making good money.

Some fighters don’t lose their ambition after tricking it rich, while others become lazy and fat and fall off the map, ruining their careers by being slothful.

Unfortunately, Thurman hasn’t shown the same ambition that once had, and he appears to have been more focused on trying to land big money fights rather than working hard in the daily grind like other fighters.

“I think my heart wants to say it’s a really good alternative. I think it all depends on the latter stages of his career,” said Shawn Porter to Fighthype reacting to the Errol Spence Jr vs. Keith Thurman fight being ordered by the WBC today at their convention.

“I just know from experience and from seeing other fighters for so long that the energy and everything that you gave for boxing early on and in the middle of your career is much different than it is in the back end of your career.

“I think there are definitely things that Thurman can do that can offset the great abilities that Errol Spence has. Errol Spence is a great fighter. Good can beat great. Once upon a time, Keith was great. So the question is, does he [still] have it in him?

“The honest answer from me based on his [Thurman] last fight, a long way from the lip to the cup. It just looks like he’s got a lot of work to do to get back to being a supreme, athletic talent, Keith Thurman, that is,” Porter said about his former conqueror Thurman.

The good news is Thurman looked top-notch in his last fight against Mario Barrios last February, beating him by a 12 round decision and appearing like the guy that he used to be.

The bad news is Thurman was coming off a nearly three-year layoff when he took the fight with Barrios. Again, it was another example of Thurman being indolent and not showing the same gung-ho attitude he once did to get off the couch and stop with his self-indulgent navel-gazing.

“Of course, on the other side of that, you have Errol Spence Jr, who has gone through a lot,” said Porter. “Everything that he has gone through has kind of helped him, and one thing that I’ve realized about Errol is that sometimes guys are born to box.

“Boxing picks you; you don’t pick boxing. I think it’s a great fight. I think the promotion is going to be really good,” said Porter about Spence vs. Thurman. “Here’s what I know. Keith is going to talk a good game, and I want him to get in the ring and back it up.

“If he backs it up, we’ve got a fantastic fight. It’s not a situation where ‘We don’t want to see Terence anymore because we got such a great fight.’ We still want to see that, but this definitely could serve as a great fight that you didn’t expect, but you’re going to get anyway.

“From what I’ve seen of Errol, he comes to the ring with a game plan, which is great. He has a fantastic team, but he also has the ability to make adjustments during the fight, and not a lot of fighters can do that.

“A lot of fighters only have one style. ‘This is what I’m bringing to the ring, and I’m going to live and die with this.’ Keith and Errol both have the ability to make in-the-ring adjustments.

“I think that’s really interesting because you have Keith, who has the ability to move, get Errol off balance, and make Errol get a little impatient. You have an Errol who has kind of grown up now, and he won’t get as impatient as he used to. This is a really good fight.

“For Keith, it’s a matter of mixing it up. I mixed it up a lot. There was a lot of in and the was a lot of out as well. In order to beat Errol, you have to be able to mix it up and keep him guessing. Keep him adjusting.

“Once he finds his rhythm and finds what this is going to be if you don’t get him off of that, you get stuck. I think it’s an intriguing matchup because you have someone that has been there before and knows what it takes to be great, and it’s just a matter of, can he [Thurman] be great again?

“With Errol Spence, he’s a guy who is great, living in his moment right now, and he’s this kind of bulldog; ‘who’s next?’ I think that’s why everybody likes Errol because he’s knocking them down, and who’s next?

“He did not want to fight him,” Porter said about Spence not wanting to fight Thurman. “Here’s the other side of that. Keith has been so long inactive, a fight here, a fight there, and nobody respects that. I didn’t respect that. Near the end of my career, when I started contemplating, ‘Okay, I might not get Terence. Who else would I fight?’

“Of course, there was a look at Keith. You have the history. This fight gets sold because of the history. There are so many things that could work, and it’s like. ‘Well, he’s inactive, you know? If I fight him and I look superb, and he just looks okay, there are too many excuses.’

“I like the fact that you have Errol saying, ‘Okay, I’m going to fight you. You have everyone saying, ‘You have to fight him,’ and it’s a matter of Errol being stone cold and going in there and handling business.

“I think the one thing that may have flown under the radar for me is I’m a very unique athlete. I think you have athletes that love sports and do sports because they love it. I saw what my opportunity was, and I knew it was going to be boxing. 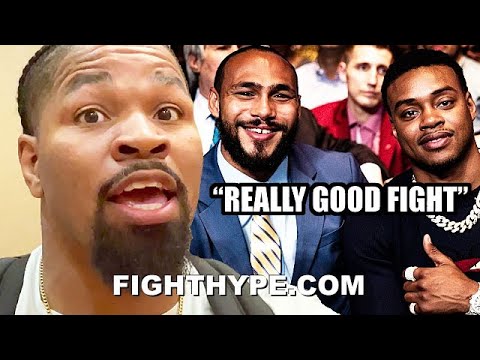 
« WBC reveals Caleb Plant vs. David Benavidez in March for final eliminator at 168