Prograis says Spence & Jermell Charlo would hurt each other at 154

By Dan Ambrose: Regis Prograis says he wouldn’t like to see Errol Spence Jr go up to 154 to challenge undisputed junior middleweight champion Jermell Charlo because they’re friends, and they’d hurt each other.

Prograis would prefer that Spence (28-0, 22 KOs) remain at 147 and fight WBO welterweight champion Terence Crawford while they’re still young. Regis points out that Sugar Ray Leonard and Tommy Hearns had fought twice by the time they were the same age as Crawford and Spence.

If Spence can’t get a fight against Crawford, he’ll move up to 154 because the fights that remain for him at 147 are risky ones against the likes of Jaron ‘Boots’ Ennis and Vergil Ortiz Jr that won’t pay a lot.

Prograis (27-1, 23 KOs) is fighting this Saturday against Jose Zepeda (35-2, 27 KOs) for the vacant WBC light welterweight title on FITE TV at the Dignity Health Sports Park, in Carson, California.

“I read that the second Sugar Ray Leonard vs. Tommy Hearn’s second fight happened before they fought the first time. They were younger. Eventually, father time gets to everybody. I don’t think it’s getting to them now, but you never know.

“Let these dudes fight and give the boxing fans what they want. I can’t control that. I just want to see them fight like everybody else. But if they don’t, I still support both. I want to watch them fight anyway.

“I don’t think they’ll fight each other,” said Prograis when asked if he believes that Spence will go up to 154 to challenge undisputed champion Jermell Charlo.

“It’s a shame that he says he’ll go to 154 without getting the Crawford fight. If he can’t get it because of the business side behind it, I guess that’s what he got to do.

“I the boxing circle, they spar together all the time. They’re just doing it for a lot of money. I’m pretty sure that if they fight, it’ll be for a s**t load of money. 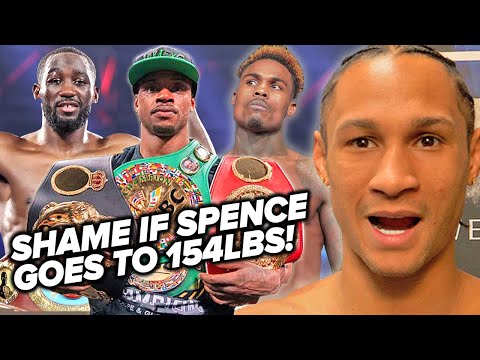