By Dan Ambrose: Montana Love’s sixth round disqualification loss to Steve Spark from last Saturday night could be overturned and changed to a no contest.

Love’s promoter Eddie Hearn is making a claim to have his DQ defeat to Spark (16-2, 14 KOs) because he feels the referee David Field made a bad decision by disqualifying Montana in the sixth round at the Rocket Mortgage FieldHouse, Cleveland.

Field decided to disqualify Montana after he appeared to shove Spark out of the ring moments after suffering a cut over his left eye from a clash of heads.

While it did look intentional to many fans what Love did, Hearn is hoping the commission will reverse the disqualification and make it a no-contest, which would preserve Montana’s unbeaten record.

Love is ranked #6 IBF, #13 WBC at light welterweight, and the defeat would send him down in the rankings, hurting his chances for a title shot.

“The commission was supporting the referee 100%. Obviously, we’ve talked about the referee knowing what’s going on because he’s firsthand. So we really don’t know what he saw,” said Claudio Trejos about DAZN house fighter Montana Love being disqualified by referee David Fields last Saturday night for appealing to intentionally push Steve Spark out of the ring.

“The commission, at this point in time, will take a look because Eddie Hearn will make an official claim to have the disqualification overturned,” Trejose continued about the Love vs. Spark fight. “They only meet on the second Tuesday of every month. So they’re going to have to wait until then.

“None of the people that were here will be allowed to watch the tape. It’s going to be fresh eyes once again. So if they do decide to overturn it, it’ll become a no-contest. But if it stays, it’ll be a DQ, and obviously, the ref [David Fields] will be ratified and confirmed. ”

“It looked to me like it was a very heated moment and exchange,” said DAZN commentator Chris Algieri when asked about his thoughts on Love appearing to push Spark out of the ring.

“They were coming off speaking to the doctor in which there was a very bad cut over the eye of Montana Love. It appeared the fight was going to end very soon, and they were going to go to the scorecards.

“Both men wanted to get their last licks in to solidify their positions in the fight, which ultimately could be the decision in who wins the fight. They were going at it; it was very aggressive. They went to the corner. Everything was elevated and escalated, and there was a tussle.

“Spark ended up on the floor of the arena, and the referee disqualified him [Love]. There’s an opportunity not to lose, either. If he loses, it’s final. If he went to the scorecards, he did not have more points than Spark, which on my scorecard, he didn’t; then the fight is final; he lost.

“But now there’s at least an opportunity for him to get a no-decision and then get a rematch down the road. It’s yet to be seen if that’s going to be true or not.

“It’s going to take weeks or months, knowing boxing, but at least there’s an opportunity for him to come out of this without a loss,” said Algieri about Montana Love.

“We have to wait until this settles, but the truth is, from a marketing standpoint, we were all left in a cliffhanger because, like Chris just said, if we had gone to the scorecards, a lot of us had Spark up,” said Trejos.

“But since it was left there, now we can all say unfinished business. It was a rough & tumble type of fight, so we can go for a second chapter, and maybe the novel will have a completely different ending,” said Trejos.

“I will say there is some finality to it because Steve Spark can fight,” said Algieri. “So now we know him. He’s been on the world stage, so now we have a new member, a new entry to the 140-lb elite division.

“This guy can really fight, and he gave Montana Love all he could handle for those first five and a half rounds. So if there’s nothing else out of this, there’s that.

“He [Montana] started out great. In the first round, he was very, very sharp; he was strong, he looked fast. He was playing to counter puncher role, and he was doing it well.

“He was setting traps throughout the night. He caught Spark a few times. Not enough to get his respect, obviously, but there were still a lot more rounds in this fight.

“I would have loved to have seen what happened later, but this fight looked a lot like what I said it was going to look like prior when we spoke off camera. I knew Spark was a rough, tough guy, and that’s how you beat a guy that is going to sit his cannon and look to counterpunch you,” said Algieri.

“If that didn’t give you a clue, I don’t know what would because we now know that he can box, he can sit on his punches, he can make it dirty, and he can sit on that high level no matter what fight you bring,” said Trejos about Spark.

“So this is a dangerous fighter that perhaps people didn’t get a chance to see. This is a fighter that has all kinds of skillsets, no matter what kind of boxing you bring to the table,” said Trejos.

“I thought he looked great,” said Algieri about light welterweight contender Richarson Hitchens. “I knew it was going to be a breakout fight against a world class guy, and he went and showed out and got a stoppage over someone that had never been stopped.

“Like you said, unfortunately, because of the end result of the main event, it leaves Hitchens on the outside. Win, lose or draw with those guys; he could have had a good fight with either one of them, no matter who won. Now, unfortunately, that’s not really open. Absolutely,” said Algieri about the idea of Hitchens facing Spark. 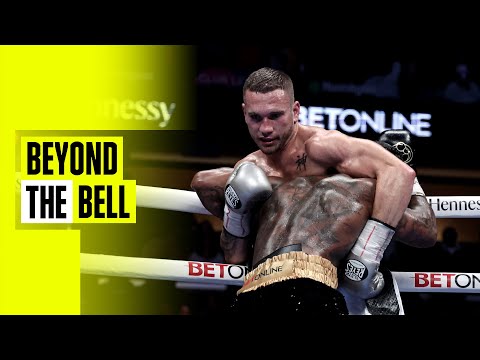 Eddie Hearn on why Gervonta Davis vs. Ryan Garcia not happening »