By Charles Brun: John Fury went ballistic today, losing his cool in reaction to his son Tyson Fury having his feet put to the fire by True Geordie over his scheduled December 3rd mismatch against the old washed 38-year-old journeyman Derek Chisora.

John took exception to True Geordie upsetting Fury (32-0-1, 23 KOs) during the interview. In looking at the interview, it seemed harmless questions on Geordie’s part because all he did was ask Fury why he chose Chisora to defend his WBC title against rather than one of the relevant, higher-ranked contenders in the division.

One gets the sense from John’s rant that he wanted softball questions for Fury, and loads of praise poured over his head.

You can only imagine what his reaction would be if commentator Howard Cossell were still around today, interviewing Fury and asking him why he’s chosen to defend against a bottom-feeder fringe contender instead of a quality heavyweight.

Chisora (33-12, 23 KOs) has lost three out of his last four fights and is undeserving of a title shot against Fury.

“He wants to raise his own profile at the expense of a multi-champion, a man that he’s not good enough to lick his feet, nevermind try to take a p*** out of him,” said John Fury to iFL TV, reacting to Tyson Fury being skewered by True Geordie for his decision to fight the washed up 38-year-old Derek Chisora instead of one of the relevant heavyweight contenders.

“I’ll tell you right now, if I’d been there in slopping range, I’d have taken Geordie’s ear straight off because you can’t talk to the king of the ring [Tyson Fury] and disrespect him like that.

“Don’t disrespect the king of the ring, especially my son. He’s proved and done everything. What do you do? You give a man like that the most respect and credit. He tried to give him neither, and Tyson got pissed off at him.

“By the way, he’s helping him [True Geordie] by giving him an interview,” said John Fury, who seems to be failing to realize that it’s the other way around. “He’s not even charging him because he can’t afford to pay Tyson.

“Tyson feels sorry for him and pick him up a bit and make his show a little bit better. That’s what he gets in return. I say to Tyson, give him nothing because he doesn’t deserve it, and he’ll never get another interview off Tyson.

“Never come in firing range of Fury because he’ll get an ear ringer. That’s how you disrespect someone and get your teeth knocked out,” said John Fury when told that the way to interview someone is the way True Geordie did.

“That’s what you want if you interview Fury like Geordie. Let him try and interview me like that in person. He’ll lose his nose and his teeth in one application. One right hand straight down the pipe. That’s True Geordie,” said John Fury. 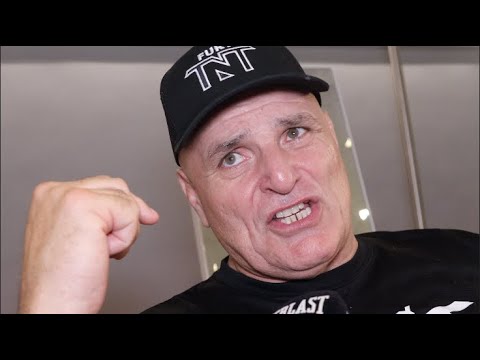