By Robert Segal: Lennox Lewis says Derek Chisora is going to need to put massive pressure on WBC heavyweight champion Tyson Fury for him to win their trilogy fight this Saturday night at the Tottenham Hotspurs Stadium in London.

The former heavyweight champion Lewis is giving Fury (32-0-1, 23 KOs) the edge, having beaten Chisora (33-12, 23 KOs) twice previously and being in the prime of his career.

Chisora, 38, does have a chance in this fight; Lewis says, he’s going to have go after Fury and not let up because he’ll be looking to outbox him.

In the last fight they had in 2014, Fury picked Chisora apart, landing constantly with moderate power until Derek’s face was severely swollen, and the fight needed to be halted.

On Saturday, it could repeat that fight, but it’s likely to end quicker because Chisora is a lot slower now. The years have been unkind to Chispra’s physical skills, and he’s a shadow of the fighter he was back then.

Fury has a lot, too, from his game, but he’s made up for it be becoming a mauler who leans on his opponents to tire them out.

“If I had a chance to fight the heavyweight champion of the world and I’d boxed him twice already, then I’m pulling out all the stops to try and win this third fight,” said Lennox Lewis to Secondsout, when asked what Derek Chisora should do to try and beat Tyson Fury. 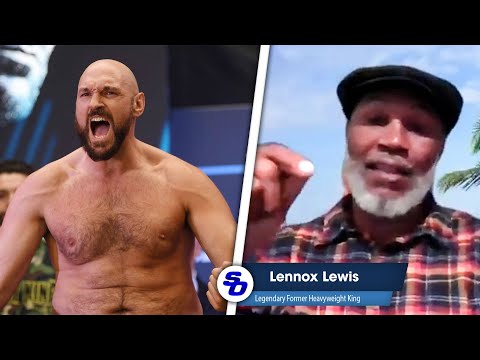 “Whatever I have to do. Whatever I didn’t bring the first two times, I’m going to bring the third time,” Lewis said about Chisora.

“He’s got a serious goal ahead of him that he has to think about every day because if he beats Tyson Fury, he’s the heavyweight champion of the world. That’s something he’s always tried to be.

“So anybody in his place will try to pull out all the stops and try to win this fight.

“It’s a normal human instinct that happens when you’re playing football or basketball with someone. You take it easy because you don’t think they’re good enough and not on that level,” said Lewis when asked if there’s a tendency for fighters to take it easy on their lesser opponents.

“Every time Tyson Fury fights, they always asked him about the other guy, and every boxer always contends with this type of thing. So he knows he has to take Chisora seriously. He knows that if Chisora hits him on the chin, he can hurt him.

“He knows he has to be focused. All boxers have this thing where they have to focus on the guy ahead of them, knowing if they take the focus off, the guy could beat them, and they lose.

“It’s happened many times, and it happened to me. Tyson Fury’s trainer [Sugarhill Steward] knows about this kind of stuff. They both know about it in camp. They know they can’t take the focus off.

“He has to be the undisputed heavyweight champion of the world,” said Lewis when asked what Fury must do to be viewed on the same level as greats like himself, Muhammad Ali, and Jack Johnson.

“If he chooses, he can clean up the division and box the other heavyweights that are out there. But I think the first thing is to become the undisputed champion of the world first.

“For Tyson Fury, he can’t retire without boxing Usyk, and if he wants to clean up the division, there are other guys that are in his era that he needs to clean up.

“Usyk is a great fighter. He’s smart, he moves well, and he was undisputed at the lower class [cruiserweight]. Look at how many times he’s lost. So you’ve got to take him seriously because this man hasn’t lost, and he’s a great fighter.

“He’s a southpaw one, and he’s an orthodox the next second,” said Lewis about Fury. “The next second, he’s moving around the ring like Muhammad Ali; he’s got his hands down, he’s got quickness, and he’s also elusive.

“Those fights are always difficult fights, but everybody has always got that little chink in their armor, and I would find it.

“I plead the fifth on that,” said Lewis when asked if he’d be interested in working with Anthony Joshua as part of his training team.

“Whoever wants it, and I think Tyson Fury has the edge right now because he’s the champion, and he’s looking at this fight as a warm-up to Usyk.

“Chisora has to look at it like, ‘This is my chance. This is my opportunity. It’s here in front of me; I need to take it.’ Yeah, absolutely. That’s the fight the world is waiting on,” said Lewis when asked if Usyk needs to be the next fight for Fury.


« “Canelo is going to shut everybody up” – Richard Schaefer