By Brian Webber: Tim Bradley predicts that Keith ‘One Time’ Thurman will be easy prey for Errol Spence Jr in his next title defense of his IBF, WBA & WBC welterweight belts in 2023.

Bradley feels that the former WBA/WBC 147-lb champion Thurman (30-1, 22 KOs) will crumble from the “relentless pressure” along with the concerted body attack from the unbeaten Spence.

Tim could be selling Thurman short, however, because he showed in his last fight in February against Mario Barrios that he still possesses the power, speed, mobility, and boxing IQ to dominate his foes.

Earlier this week, on Wednesday, the WBC ordered the Spence vs. Thuran fight at their convention, but we haven’t heard an official word from Errol if he’s going to take the match or give up his World Boxing Council belt.

Given that Thurman is Spence’s WBC mandatory, it leaves Errol with no other choice but to take the fight if he wants to keep his belt with that organization.

On paper, Thurman is a tougher fight for Spence than Terence Crawford because he’s more powerful and mobile, and he’s someone that will give him fits with his boxing IQ.

“Thurman ain’t setting no traps against no Errol Spence, I’ll tell you that right now,” said Tim Bradley to Fighthype when asked about his thoughts on the recently WBC-ordered Errol Spence vs. Keith ‘One Time’ Thurman fight.

The way Bradley was talking during the interview, you got to wonder if he’s bitter about Thurman getting the fight against Spence instead of Crawford.

Bradley has been eager for ages to see Crawford fight Spence, but instead of him getting the match, it’s Thurman. Of course, Crawford only has himself to blame for not getting the fight with Errol because he walked away from the negotiations.

“The only thing Thurman is going to do is sit down after he gets hit with one of those body shots from Errol Spence. I’m just keeping it 100.

“When I say alive, I don’t think he’s going to come out on his feet. I think he’ll get knocked out. He’ll get stopped by Errol Spence. But it’s a good fight. Thurman is still a big name in the sport somewhat, and he’s still a game guy. He’s still a guy that believes.

“He’s still a guy that believes he can fight the best in the division. I got to give him respect for that. If Thurman takes the fight and it’s really going down, more power to him, man.

Spence vs. Crawford: who’s to blame?

“I really don’t care who’s to blame,” said Bradley about the Spence vs. Terence Crawford fight failing to get negotiated. “I think we just want to see the fight, bro. That’s just it. I’m not pointing a finger at anyone.

“Sooner or later, guys, let’s get this fight happening. Let’s make the fight. So I’m not really worried about it. It’s no longer on my radar anymore.

“Once they announce the fight and they’re going to make it happen, then that’s when I’m going to get excited about it, but until then, I’m going to let it play out and let them do their thing. It is what it is.

“Avanesyan? Oh yeah, no doubt about it,” said Bradley when asked if David Avanesyan is going to get cooked by Crawford on December 10th. “Yeah, he’s getting cooked, no doubt. He has the perfect style for Crawford.

“Crawford’s boxing ability, punching power, timing, he’s too impeccable for a guy like Avanesyan, but still a good fight for Crawford. I’m glad he’s getting himself back in the ring.

“Like I said, hopefully, in 2023, these guys [Spence & Crawford] will get it on, and we’ll see who the best welterweight in the world is,” said Bradley. 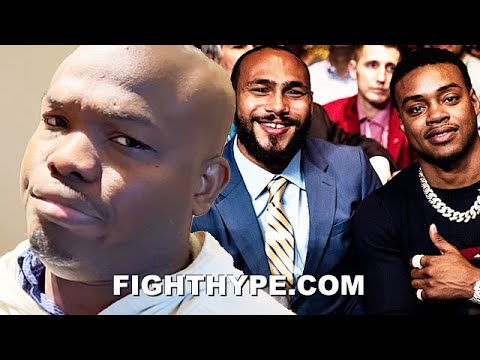 Bozy Ennis wants Boots to get a shot at Spence & Crawford »