Fury-Chisora 3: “Pension plan for Chisora before he retires” – Teddy Atlas

By Craig Daly: Teddy Atlas sees this Saturday’s headliner as a “pension plan” for Derek Chisora in being given a title shot against WBC heavyweight champion Tyson Fury at the Tottenham Hotspurs Stadium in London.

Atlas feels that the 38-year-old warhorse Chisora (33-12, 23 KOs) has earned this golden parachute for one last massive payday against the unbeaten Fury (32-0, 22 KO).

Already a millionaire with an estimated net worth of $7.56 million, according to Sportsbrief, Chisora will be paid well for his title shot against Fury on Saturday in their clash on BT Sport Box Office PPV and ESPN+.

Many boxing fans see this fight as an exhibition or sparring match between Fury and Chisora.

They’ve acted like old buddies in the build-up to the fight, and it’s difficult to view it as a true athletic competition, given how friendly they’ve been while promoting the clash.

With that said, it would have been nice for Fury to bestow his Midas touch on a more deserving heavyweight that is higher ranked and hasn’t become a millionaire yet.

There are countless contenders in the division that deserve a title shot, and it’s troubling that Fury has chosen to give Chisora a shot, especially given that he’s already twice beaten him in fights that were NOT in the least competitive.

Chisora resembled a punching bag in losing to Fury in 2011 and 2014. In looking at the deterioration in Chisora’s form in his last fight against Kubrat Pulev, one must worry about his health in this fight against Fury.

Derek gets a golden parachute

“It’s a pension plan for Chisora before he retires,” said Teddy Atlas on The Fight, talking about Saturday’s trilogy match between Tyson Fury and Derek Chisora.

“It’s a good thing. I love pension plans. It’s an old warhorse who has really given his all for so many years. It’s the equivalent of giving someone a gold watch for their long service for their job.

“For 15 years, where he’s fought everyone for 45 fights. This is Fury’s way of giving him a nice parting gift. I think it’s great. That’s what it is.

“The second thing is, it’s an easy payday for Fury against a 38-year-old guy. He’s already beaten him twice and stopped him the last time. The corner stopped it because he was getting to Chisora in a bad way.

Atlas: Chisora has earned this gift

“On paper, it’s not supposed to be real competitive. You better be careful of the uppercut from Fury. Use the jab, control the distance and make Chisora pay for every real estate that he’s trying to make up, make him pay for it and catch him with the uppercut as he comes in.

“It’s a beautiful gesture in an awful ugly business. Over in the United States, nobody would watch it, but over across the pond, it’ll sell out and make millions of dollars because the English fans love their heavyweights.

“I’d watch it because Chisora is never going to give in. He’s always going to be trying to get to you. He’s earned the right to get this gift,” said Atlas, leaving out the fact that Chisora has lost three out of his last four fights and hasn’t earned the right to fight or a world title.

“I applaud Fury for giving it to him, but I shouldn’t applaud too loud because he’s getting a payday for it. I’m sure all the pubs nearby will also benefit. All the people that own businesses nearby [in London] will benefit. I’m sure the pubs will do real well.

“I love the way Chisora fights, and I love the way after he does battle, his code of conduct and principles of behavior. Make the money that this opportunity gives you to make. You deserve it,” said Atlas. 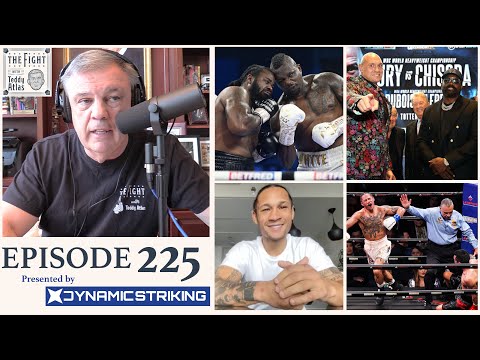 
« Chris Eubank Jr tells Conor Benn: “own up and ask for forgiveness”