By Brian Webber: Rolando ‘Rolly’ Romero says Errol Spence Jr will be afraid to get “cracked” by former WBA/WBC welterweight champion Keith ‘One Time’ Thurman when or if they fight each other next year.

Errol, 32, was hurt against former WBA 147-lb champion Yordenis Ugas last April, and he’s not a puncher, said Rolly. As a result, if the Spence-Thurman fight happens, Spence will stay on the outside and make sure he doesn’t get hit by Thurman, according to Rolly.

With Thurman’s inactivity in the last five years of his career, Rolly isn’t sure if he’s sharp enough at this point for him to beat Spence. He thinks that if this were Thurman from three years ago, Spence would have his hands full.

Spence hasn’t said whether he’ll take the fight with Thurman, but given that he’s been quiet about it since the WBC ordered the match last Wednesday, that suggests that they’ll be fighting. If the bout weren’t happening, Spence would have dismissed the notion on social media.

“Thurman took a lot of time off. He fought [Mario] Barrios in the first week of February. That was the first time he fought in two years?

That’s a lot of layoffs and all that stuff. Honestly, I wish Keith Thurman was more active with his career. I did like him; he could crack. He’s a good fighter, you know? Spence is the more active fighter. That’s where it’s going to go.

“As I said, you [Thurman] go inactive for damn near three years. Not even just inactive, but completely inactive off social media and everything. He’s kind of been a ghost.

“We’ll see. Thurman can crack, and I’ll be honest, Spence doesn’t like punchers, man. Every time Spence fights punchers, he’s like this [fighting at a distance] the entire time.

“He’s just long and lanky; that’s what it is. Like is said, he doesn’t have a killer instinct, and he’s not going to go in and try to kill Thurman because Thurman will just crack,” Rolly said about Spence. “Yeah, but [Yordenis] Ugas isn’t a puncher,” said Rolando when told that Errol went for the finish against Yordenis Ugas last April after he had his eye all jacked up.

“Ugas isn’t a puncher, and Ugas hurt him. When he [Spence] got cracked, he went back and chilled out for a while. He doesn’t want to be cracked by Thurman.

“Like I said, I don’t know how good Thurman is anymore because Thurman has been laid off for a long time. Maybe it was Thurman from a few years back, but he took a lot of time off.

“I don’t have an opinion about that fight, but good luck for Frank Martin,” said Rolly when asked about his view on the Michel Rivera vs. Frank Martin fight.

“That would have been one of the more marketable fights in recent boxing history. At least within the last ten years,” said Rolly about a fight between him and Adrien Broner that failed to materialize. I think it would have been fun not only for me but I think for Broner too.

It would have been fun for the fans, and everyone would have tuned into it. I wish it did happen that way, but it didn’t happen that way. I’m not allowed to disclose information like that,” said Rolly when asked if BLK Prime came to him.

“Regardless if they did or they didn’t, I’m not allowed to disclose information like that.

“He doesn’t want to get cracked. Knowing Spence, he’s going to try and stay a mile away. 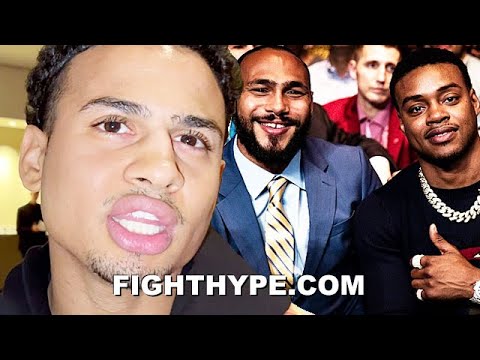