By Barry Holbrook: Dillian Whyte has four big names on his target list that he wants to face before he retires from boxing. The top of the list for Whyte (27-3, 19 KOs) are rematches against Tyson Fury and Anthony Joshua, both of which knocked him out.

Fans have no interest in seeing Whyte fight a rematch with Fury after watching the way he was knocked out by him last April.

Considering that Whyte has lost two out of his last four fights, one would say his chances of getting fights against Fury, Usyk, and Wilder are virtually zero.

Eddie Hearn is already planning on using Whyte as a tune-up against the struggling Joshua. That’ll be a big payday for Whyte, but let’s not get things twisted. The reason Dillian has been picked out by Hearn is to give Joshua a confidence booster.

If Whyte was considered a risky fight for Joshua, Hearn wouldn’t likely make the fight.

For the time being, Whyte is facing low-ranked fringe contender Jermaine Franklin (21-0, 14 KOs) this month live on DAZN at the Ovo Arena in London, England.

“Jermaine Franklin, Joshua, Wilder, Fury, Usyk, and then I’ll have fought everyone there is to fight in my era,” said Dillian Whyte to talkSPORT Boxing when asked who he wants to fight before retiring.

“I don’t know. I have to see how my body feels. I’m still young, I’m still feeling good,” Whyte said when asked if he can fight another four more years.

“The one thing that’s good about not having a lot of amateur fights is I don’t have a lot of mileage on the clock.

“Sometimes these guys are erratic, and they do wild things. He’s a big guy, and he has a bit of power as well. He says he’s going to knock me out and stuff. I love that kind of talk.

“It’s a funny one. I’m glad because Fury is punching holes in him,” said Whyte about Franklin working with Tyson Fury. 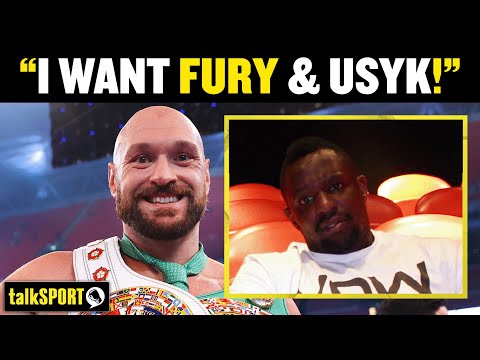