By Vince D’Writer: Initially David Avanesyan (29-3-1, 17 KOs) was preparing to defend his European welterweight title against Jon Miguez in November, but things changed after Avanesyan’s team received a pivotal phone call, that made them withdraw from the fight with Miguez, and accept the opportunity to battle an undefeated world champion, who sits at the top of the pound-for-pound list.

Terence “Bud” Crawford (38-0, 29 KOs) was occupied with negotiations for a super fight with Errol Spence Jr until the month of October when he made a shocking announcement. The WBO welterweight champion made the quick transition from negotiating for the highly anticipated undisputed bout with Spence, to signing on to defend his WBO title against David Avanesyan. 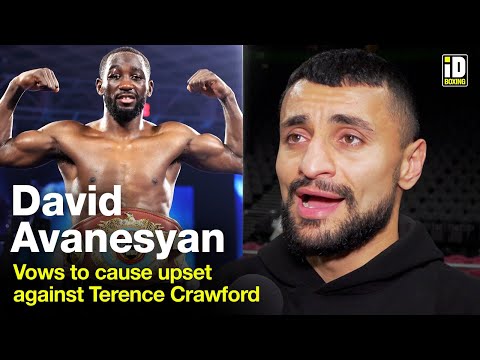 Crawford’s announcement of his December 10 bout on BLK Prime, was both shocking and disappointing to boxing fans who have been impatiently waiting four years to see an Errol Spence Jr vs Terence Crawford mega fight. After taking a few moments to download the unpleasant data, the first question that came to most boxing fans minds was, who is David Avanesyan?

A native of Pyatigorsk, Russia, David Avanesyan’s name became known back in May 2016 when he scored a unanimous decision victory over a then 44-year-old former three-division world champion, Shane Mosley. Unfortunately for Avanesyan, he didn’t ride the wave of momentum, as he lost two of his next three fights.

In February 2017 Avanesyan was defeated by Lamont Peterson by way of unanimous decision, and a year later Avanesyan suffered a sixth round TKO loss to Egidijus Kavaliauskas. David Avanesyan would bounce back in a big way, as he scored TKO victories in his next six bouts.

One of David Avanesyan’s most notable fights was his February 2021 clash with previously undefeated Josh Kelly. Avanesyan got off to a slow start as Kelly looked sharp in the opening round. Kelly used his superior hand speed as he consistently scored with the jab and precise combinations.

He was in complete control until the fifth round when Avanesyan started pressing forward and landing big shots. In the sixth round Avanesyan used a 3-2 combination to knock Kelly down.

Kelly was able to get up, but he went down a second time when Avanesyan hit him with a right hand that made Kelly’s corner decide to throw in the towel.

Now the 34-year-old Avanesyan is on the verge of facing one of the best boxers in the world today. Avanesyan is a power puncher who rarely uses a jab. He likes to square up and use his lead right hand as his setup. Avanesyan has a very aggressive style, in which he prefers to press forward while using a high guard.

In the sport of boxing there is the old adage of styles make fights, and in the case of Avanesyan vs Crawford, Avanesyan’s style may not be conducive to winning this particular fight. Terence Crawford is an elite boxer who has all the tools, and fighting off his back foot is one of his specialties.

Many boxing fans are still stuck in the disappointment phase due to the fact that they were expecting to finally see the Spence vs Crawford mega fight. David Avanesyan is going into his December 10 bout with Crawford as a huge underdog, but during a interview with ‘iD Boxing,’ Avanesyan was either overwhelmed with confidence, or he was displaying a solid poker face.

“Listen, I feel very good. I’m ready for this fight. I want big fight. I’m up here for my God give me a big shot. This is a big fight, and I give everything for my camp. I had a good camp. December 10, I need to take and crush this fight with Terence Crawford, and take his belt.”