Reacting to Vergil’s former trainer Robert Garcia saying that Boots (29-0, 27 KOs) would need to “kill” Ortiz Jr to get him to stop coming forward, Bozy said that’s what would happen if they left Vergil out there to soak up punishment.

The 24-year-old Vergil (19-0, 19 KOs) could fight for a world title next against WBA ‘regular’ welterweight champion Eimantas Stanionis. That fight was ordered by the World Boxing Association last week, but it’s still unknown if the match will happen or not.

If it did, the winner would need to fight WBA champion Errol ‘The Truth’ Spence, and that would be bad for the Stanionis-Ortiz winner because neither of them is in the same league as Errol talent-wise.

Vergil Ortiz Jr. is a good basic slugger, but as we’ve seen him struggle in his fights against Michael McKinson and Egidijus Kavaliauskas, he’s too one-dimensional and simplistic to have a chance of beating the likes of Boots Ennis, Spence, or Terence Crawford. Those are elite-level fighters, whereas Vergil is a B-level guy.

“I don’t care who we fight for the titles. It can be whoever they put up front. Rashidi [Ellis, [Keith] Thurman, [Vergil] Ortiz, all the top guys,” said trainer Derek ‘Bozy’ Ennis to YSM Sports Media about his son, Jaron’Boots’ Ennis, wanting to fight for one of the welterweight titles if the current champions Errol Spence Jr and Terence Crawford aren’t going to fight.

“I don’t think they want that to happen because that’s what will happen if they let him [Vergil Jr] stay in the ring too long with Boots. They talk about he can punch and has got good punching power, and he walks. You ain’t going to walk Boots down. You going to run into something.

“Boots can fight you inside and outside. It’s whatever you want to do; we can do. We can adapt to any situation. He’s [Vergil] a good fighter too. He just fought [Michael] Mckinson. Now look what happened when he fought him, and he’s not a puncher.

“Boots can box and punch. Yeah, that boy [McKinson] was giving him [Ortiz] some angles and different movement. A moving target is hard to hit. You got to keep that pressure. If you put pressure on someone that can punch, you going to run into some shots.

“Everybody knows that Boots fights you and outside,” said Bozy when told that Sergey Lipinets attempted to fight Boots Ennis on the inside and got knocked out in the sixth round.

“All I got to do is give him [Boots] the say so or the go sign, and I tell him when to go in and not to go in. I can tell him when it’s time to go take these guys out.

“Because he’s not with Vergil Ortiz no more, so he has to say something like that to get him to come back with him,” said about Robert Garcia, having previously said that Vergil wouldn’t be ready to fight Boots for four or five years.

“As a matter of fact, he told Cameron Dunkin that he’s not ready for Boots right now. That was way back. Now they flipped the script now, saying this or that. You heard what Boots said. ‘We can fight him [Vergil] right now.’

“If they present it to us, we’re going to take it,” said Bozy about his son Boots Ennis wanting to fight Vergil Ortiz Jr right now. 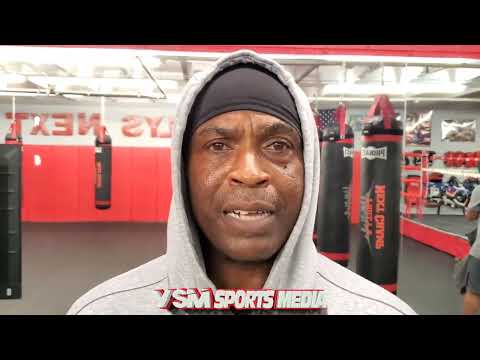