By Barry Holbrook: Tyson Fury is convinced that his would-be fight with Anthony Joshua fell apart, not because of the two deadlines that he sent, but rather because AJ lacked the “balls” to face him.

Fury believes that Joshua originally was on board with fighting him, but then after a week of thinking it over, he changed his mind.

With that said, many boxing fans believe it was Fury (32-0-1, 23 KOs) who fouled things up by setting deadlines for Joshua (24-3, 22 KOs) to sign the contract. Fury didn’t do this with the journeyman Dereck Chisora, and not surprising the contract was signed.

“I was that confident that I put ten grand on it that he wouldn’t sign the contract, and he didn’t. I’m not going to wait around for someone that I’m chucking a bone to,” said Tyson Fury to talkSPORT Boxing about his failed negotiations with Anthony Joshua.

“It’s not like he’s a champion, and he’s chucking me a bone. It’s a lack of balls. If you’re in charge and your assertive, and you’re the man of your team, you tell the team to make the fight happen if you really want it.

“If you don’t want it, you find a million excuses why. I can understand why because to make this Chisora fight, this is me fighting Chisora in a trilogy, and 258 made this quite difficult.

“I can only imagine how difficult it would be with the lawyers of the other fella [Joshua], the golden child. It’s very unimportant today because it’s past history. I’m fighting who I’m fighting, Derek.

“Initially, when I made the video for Joshua, he was all up for it like it was a great deal, and he was on board. I do think in the next seven days, he changed his mind, and his team didn’t want it.

“I’m in charge of everything because I’m the man of my team. Everyone works for me. You can’t make a fight that somebody else doesn’t want. I don’t think you could have dragged him there with a JCB,” said Fury. 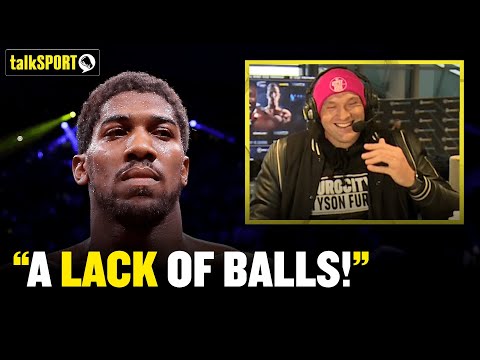 Tszyu vs Charlo: “This is the Super Bowl, the Grand Final…” – Tim Tszyu »