By Dan Ambrose: Sebastian ‘The Towering Inferno’ Fundora weighed in today at 153.5 lbs for the title defense of his interim WBC junior middleweight belt against challenger Carlos Ocampo for their headliner this Saturday, October 8th on Showtime at the Dignity Health Sports Park, in Carson, California. For his part, Ocampo (34-1, 22 KOs) weighed in at 153.5 lbs.

Fundora (19-0-1, 13 KOs) will be making his first defense of his WBC interim 154-lb title that he captured last April against Erickson Lubin. Ocampo comes into the contest with an eleven-fight winning streak. 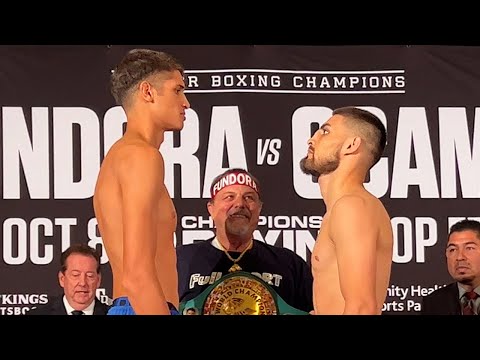 The 6’6″ Fundora needs a victory on Saturday to keep alive his hopes of challenging undisputed junior middleweight champion Jermell Charlo.

“I know he’s been on an 11-win streak,” said Fundora to Showtime about Ocampo. “Other than that, he’s a Mexican fighter and likes to bang. We’ll see what the fight presents.

“Maybe he lets me use my reach. If he comes to bang, we’re definitely going to show him that we can bang as well. We did all this work in camp. We’re going to finish the job and put on a good show,” said Fundora.

“I think for Fundora, I don’t know if he kind of thinks like that,” said Brian Custer to K.O. Artist Sports when asked if Sebastian Fundora compares himself to others.

“I just think that he is like, ‘I want to fight for a title, and the only way I’m going to get it is I got to knock [out] or beat these guys in front of me. If this is the next guy in front of me, then let’s get it.

“I think that’s the way he looks at it because he’s still young in the game. We might think of it like that, but I don’t think he sees it that way.

“I think he realizes too that he can punch. I’m talking about Fundora now, and I think that’s what he showed in that [Erickson] Lubin fight. It’ll be really hard to get on the inside against this guy, especially since Sebastian is realizing too, ‘You know what? I’ve got this height and this reach for a reason. I need to start using it.’

“I think for Charlo, that’s what he’s usually at his best when he’s on the outside. That’s what happened with [Brian] Castano. He [Jermell] fought on the outside and used his movement, and boom, he caught him.

“That’s why stylistically, he’s just a nightmare for a number of fighters. I think the difference for Charlo is he’s so athletic and so powerful. That’s the thing that when you look at the 154-pound division. I don’t know if there are a lot of guys that have that athleticism that Charlo has.

“I know, it’s crazy to be young like that again,” said Custer when told that Fundora said he could still make 147 if he had to. “Can you imagine this guy at 147 with the great fighters you have there too?

“That’s the great thing about 147 and 154. It’s like you’re walking into a landmine. There are so many big names in that division. That would be crazy. Even him when he said that would be a great fight him and Boots Ennis. Can you imagine that?

“It’s great to have that kind of genetics where you can lose weight like that. It’s so funny because so many people want to see him go up. ‘No, he’s too tall.

“He should be fighting at 168, 175,’ but he just doesn’t have that body type yet. Exactly right, that’s a great point,” said Custer when told that Fundora is like the resurrection of Paul Williams.