Mauricio Lara on Josh Warrington: “I want to retire him from boxing”

By Charles Brun: Mauricio Lara said last Saturday night that he wants to send IBF featherweight champion Josh Warrington into retirement when/if he gets the opportunity to fight the Leeds, England, native in a trilogy match.

According to promoter Eddie Hearn, Warrington wants the trilogy fight with Lara. With that said, Warrington (31-1-1, 8 KOs) will be defending against his mandatory Luis Alberto Lopez (26-2, 15 KOs) on December 10th in Leeds.

Assuming that fight doesn’t end on cuts due to numerous clashes of heads like we saw in Warrington’s rematch with Lara and in his recent fight with Kiko Martinez, #1 IBF Lopez has an excellent chance of winning.

Lara (25-2-1, 18 KOs) obliterated his second straight foe, knocking out the normally durable Jose Sanmartin (33-6-1, 25 KOs) in the third round in the main event at the Plaza de Toros Arroyo in Mexico City.

“Both of them,” Mauricio Lara stated last Saturday night when asked who he wants to fight between Josh Warrington and Leigh Wood.

“With Warrington, it’s become something very personal, and for Wood, he doesn’t have the right to call himself a champion because he said he was hurt, and I saw various stories on Instagram, and it looks like it’s not true.

“I want to face Josh Warrington,” the hard-hitting Lara continued. “It’s become something very personal, and I want to retire him from boxing. We’re gonna keep working hard to become a world champion.”

The 24-year-old Lara has been transformed from an anonymous bottom-ranked fringe contender into one of the more popular fighters in Mexico following his ninth round knockout victory over Warrington last year in February in Leeds, England.

What particularly angers Lara is how Warrington repeatedly accidentally rammed heads with him in their rematch last year in September, causing a bad cut that halted the contest.

It appeared to many boxing fans that Warrington had intentionally lowered his head and charged Lara repeatedly. The bad cut that Lara suffered was inevitable with the way Warrington was coming forward.

What was also troubling is the fight was ruled a second round technical draw, even though Lara had dominated both rounds with his power punching. Indeed, the two rounds were as close as Lara’s fight last night against Jose Sanmartin.

It was basically Lara nailing Warrington with massive shots and then getting accidentally rammed with the crown of the Leed’s native head in return.

With the fight ending, Lara wanted a trilogy match with Warrington immediately. Instead, Warrington fought IBF 126-lb champion Kiko Martinez and stopped him in the seventh round last March to become the new champion of that organization. 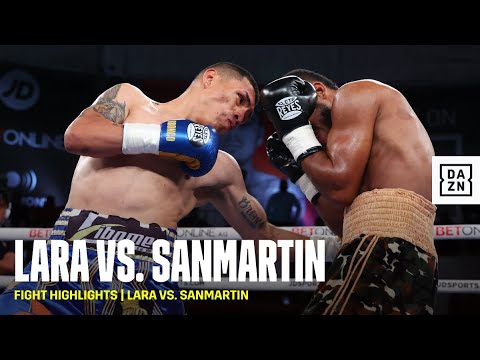 
« Bivol vs. Ramirez – “One of the biggest fights of the year” – Eddie Hearn