By Barry Holbrook: Gareth A Davies was floored at learning today that Conor Benn gave up his boxing license last Friday before his meeting with the BBBofC.

Davies was also surprised that Benn’s promoter Eddie Hearn didn’t mention this when he spoke with him. Gareth figured that Hearn would have told him about it during the “off the record time.”

Hearn did say today that he believes that there’s the potential for contamination of Benn’s drug test with VADA, which came up positive for the banned substance clomifene.

Benn still isn’t banned or suspended yet, but he could soon be once the investigation is completed.

“I suspect there’s an ongoing legal case for him to clear his name, and he’s decided to remove himself from a ban or a suspension,” said Gareth A. Davies to iFL TV about Conor Benn forfeiting his boxing license before his meeting with the BBBoF last Friday.

“So he’s surrendered his license basically, which is kind of a sensible thing to do until he’s able to prove  [he’s innocent]. They haven’t banned or suspended him, but they have stated that it’s under a misconduct charge.

“They haven’t gone for the B sample yet publicly. The biggest shock for me is sitting with Eddie Hearn today from about 20 to 12 until a quarter past one, where Eddie Hearn, and rightly so, believes his fighter is innocent, and he fully feels that. I hope Conor is innocent and clean, but Eddie didn’t mention once to us from the national newspapers that Conor had given up his license.

“I find that beggers belief, frankly. Obviously, it’s down to the board to tell us that, but we had a lot of off-the-record time today with Eddie, and I’m surprised he didn’t tell us.

“As I was penning my story on Eddie’s words today about the tardiness and the slowness of the board in reacting in not contacting them from the Friday before fight week all the way until Tuesday or Wednesday when they called the fight off when they were still going through wanting a hearing thing in front of the board to try and get this over the line.

“I’m just staggered that he didn’t tell us today or during lunch or during the sit down in a private room in Baker Street. I was very surprised when that statement came out, but there it is. Everything is in limbo.

“Eddie has said to us both on and off the record that you will hear Conor’s case. I fully believed him. I sat in a room with him, Tony Sims, and Nigel, his father, where they have expressly told me that he genuinely does not have a clue about how this stuff got in his body.

“In many ways, I’m fascinated to see what the defense is going to be for this. We’re very fond of Conor Benn. Most people are when they meet him. He’s a wonderful human being. You want to believe he hasn’t cheated. You actually want to believe, but who knows? Only Conor and the people working with him.

“We know now, but we didn’t know earlier today that the license had been given in. The defense will be mounted, and it will take weeks for this to happen.

“UKAD will finish their investigation based on the VADA findings of clomiphene, and the board will have him in front of them again. They’ll make a decision about whether he gets a ban, whether it’s two months, four months, eight months, a year, two years.

“But I suspect if he can’t mount a credible reason why clomiphene traces, picograms, tiny, tiny picograms were found in his system, then I suspect if there isn’t a viable defense mounted and he doesn’t have a reason, it’s just chicken eggs or whatever it is, they’re going to have to ban him in my view or suspend him for a length of time.

“As they did with Tyson Fury, who was away for nearly two years, they’ll backdate his suspension, and we probably won’t see Conor in the ring for a year’s time until a year’s time. That’s what I think will happen.

“We won’t see him in the ring until this time next year. That is my instinct on this, and I don’t think we’ll ever see the Benn and Eubank fight. It was very interesting.

“Eddie said that he did have some regret about those 26 hours in which the board put a statement out soon after on the morning of fight week. Eddie revealed why for 27 hours.

“I did specifically ask them, ‘Why didn’t you do anything for 26, 27 hours then,’ and he said, ‘Because we were exploring everything? Some people were saying let’s just go ahead with the fight. He’s not banned or suspended, but I decided we would not go with another commission, and we won’t ever do that.’

“Why it took them 27 hours? In those 27 hours, I think boxing was dragged through the mud. Whatever anyone says, legally or otherwise, as soon as the board said that fight was canceled, I think they should have said, ‘We’re just going to have to go with it.’

“The board aren’t going to have a hearing before Saturday, as they did with Dillian on the Saturday morning of the fight. This was different because that was a UKAD test, so they could go ahead and do it.

But they had the requisite needs to get UKAD to agree to look into the VADA test in order to have that hearing. These things take time, unfortunately. What we’ve learned from this is, and Eddie agrees with this very much, is if another body, not the statutory body with UKAD, shows an adverse finding that needs to be passed over straight away.

“It needs to be acted on straight away, and then we don’t have this situation where the optics on boxing look like people are covering it up. He said, ‘The last thing we want to do is sweep it under the carpet. Everybody felt uncomfortable with the situation.’

“Those were his words. He was very transparent and very open today, but I just think that Eddie has a few regrets about how he went about it.

“They found out about the cancellation on the Wednesday when they were on their way to the workouts. In my view, if I were the promoter, I’d have put out a statement there and then.

“I dont think Eddie was trying to do anything underhand. I just think he was stretching the legality of the situation, looking at the parameters.

“He also claimed, Eddie, that it wasn’t his contractual right to cancel the contest because Chris Eubank Jr wanted to carry on with it. They had to wait for the decision of the board to cancel it,” said Davies. 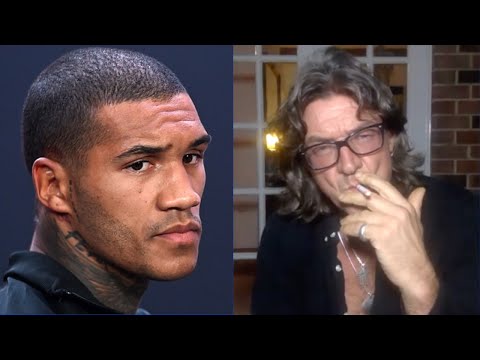 
« WBC president confirms Wilder vs. Ruiz to be sanctioned on Nov.8th