Hearn sees Eubank Jr. eating whatever he wants during the build-up to the fight, and he feels this is a sign that he’s overlooking the young 26-year-old Benn (21-0, 14 KOs).

It’s unclear whether it’s dawned on Hearn that Eubank Jr. has looked at Benn’s career resume and noted the complete absence of upper-tier opposition at 147.

The idea of Eubank Jr fighting a welterweight, and a novice one at that, it’s not surprising that he’s overlooking Benn.

Now, Benn is moving up two weight classes to middleweight and facing one of the best in the division in Eubank Jr (32-2, 23 KOs).

If Benn can pull off the upset, his popularity will soar in the UK. For Benn to become popular in the U.S, he’ll need to defeat one of the top fighters like Jaron ‘Boots’ Ennis, Errol Spence Jr, Terence Crawford, or Keith Thurman.

If Benn could defeat a 154-pounder like Sebastian Fundora or Jermell Charlo, that would do a lot for his popularity in the States.

It’s doubtful that Benn could beat either of those two, and I wouldn’t like his chances against WBO middleweight champion Janibek Alimkhanuly or Jermall Charlo. Those two are on another level than Eubank Jr, who has turned out to be a disappointing underachiever.

I don’t think Hearn is going to allow Benn to fight any of the top 154-pounders or 160-pounders because the outcome will likely be bad for him. Against the underachiever Eubank Jr, Benn has a chance, but only because he’s fighting a guy that has done very little in his career.

When Eubank Jr first started out many years ago, there was a lot of hope that he would eventually become a world champion. But after a loss to George Groves, whatever ambition that Eubank Jr once had was killed off. From that point on, Eubank Jr has been content to fight domestic-level opposition, and he’s wasted his career.

Eubank Jr will make life-changing money against Conor Benn this Saturday, and he can basically retire, win or lose.

It’s doubtful that Eubank Jr will continue if he loses because a defeat against the novice Benn will be a clear signal that he lacks the talent to defeat the top middleweight champions.

I don’t think Eubank Jr is all that interested in fighting the likes of Jermall Charlo or Janibek. Sure, he’d like to fight Gennadiy Golovkin, but only because of the big payday he’d get for that.

“Stardom would be on another level,” said Hearn when asked where Conor Benn’s career would go if he were to upset Chris Eubank Jr. “The goal is to win a welterweight world title.

“Eubank has a tremendous chin. As he gets older, which he is doing, sometimes it can be a little bit weaker. It’s going to be difficult for Conor Benn to stop and knock Eubank out. He believes he can do it.

“Look, Conor Benn is massively underrated as a boxer as well. His movement is sensational, and his footwork is really good, and we haven’t really seen that from Eubank.

“Eubank is definitely taking Conor Benn lightly in this fight. We talk about the trolling, but in his mind, he thinks this is a demolition job. He thinks they’re going to go out and meet in the middle of the ring.

“It’s going to be too big, too strong, too powerful, and he’s going to take him out. I think Conor Benn has something else up his sleeve.

“Yeah, for sure, especially if he were to stop Eubank and especially coming up from welterweight,” said Hearn when told that Benn would have to be seen as one of the hardest punchers in the sport if he scores a knockout of Eubank Jr.

“I think Conor is a ferocious puncher. He’s got to be careful not to stand in the pocket and trade with Eubank because that’s what Eubank will want. He’s got to box him and be smart as well.

“He [Benn] can really crack at welterweight. If he can carry that power up to 157 pounds? He’ll definitely move back down to 147. I think we talk about this fight being a ‘no lose.’ I never agree with that.

“If you get beat, it’s always a lose, but certainly, people applaud him for taking the jump up and the challenge. If it’s a great fight, a tight fight, his stock can go through the roof. If he were to get beaten convincingly, it’s never good.

“But yes, he would return to 147 pounds and continue the trajectory to a world title. This is outside of his comfort zone, outside of his weight class, but this is a challenge that he’s accepted and believes he can win.

“How nice is it? Now title on the line. No regional title, no unified title, no undisputed title, no linear championship, yet it’s probably the biggest fight we’ve ever done. It just shows you the size of the fight. People don’t care about this fight being for a belt.

“It’s about something much bigger. No,” said Hearn when asked if there’s a rematch clause for the Eubank Jr. vs. Benn fight. “This fight is so huge, we could have sold out two Wembleys for this fight.

“If it’s a great fight, we saw two unbelievable fights between fathers, and we should have seen three. I’m pretty sure you won’t just see one of these, but it has to be the fight that we expect it to be,” said Hearn. 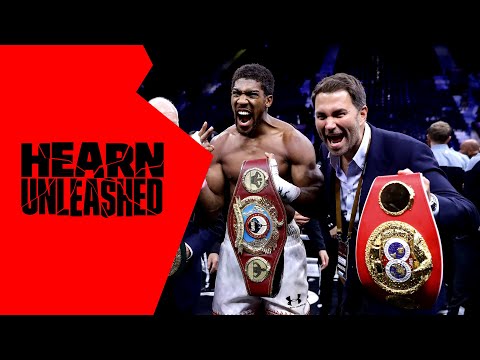 
« Gilberto Ramirez on Dmitry Bivol: “I will break him down”

Eubank Jr vs. Benn in jeopardy after Conor’s failed test »