Hearn says he was impressed with Deontay’s first round knockout win over Robert Helenius last Saturday night, but he says the Finnish fighter was “past his best.” In other words, Wilder (43-2-1, 42 KOs) only gets partial credit for his sensational KO victory over the 6’6″ Helenius.

WBC president Mauricio Sulaiman said this week that Wilder would be ordered to defend against #1 Ruiz (35-2, 22 KOs) at the sanctioning bodies’ next convention in Acapulco, Mexico. It’ll be up to Wilder & his management at PBC if they want to take the fight with Ruiz.

Hearn feels that Wilder vs. Anthony Joshua is the biggest fight that can be made, but apparently, he’s not interested in putting AJ in with him yet.

Hearn is talking about having Joshua take a tune-up in early 2023 and then matching him against 35-year-old Dillian Whyte, which is arguably another warm-up fight.

“Joshua against Deontay Wilder may be the biggest fight in boxing because someone is knocking somebody out in that fight,” said Eddie Hearn to Fight Hub TV. “It’s one that you watch like that [with hands over eyes].

“Joshua will be back very early next year, and I want to see him get active. Ruiz-Wilder is a brilliant fight. I really like Andy Ruiz. I thought he looked better against [Luis] Ortiz. It was a good victory. I see him beating Deontay Wilder.

“Wilder was good the other night. [Robert] maybe past his best. Still, Wilder is very dangerous. He’s brilliant for the sport, and Andy Ruiz is a warrior, so he won’t mind standing in front of Wilder.

“He has that low style that comes in over the top, and sometimes Wilder doesn’t like that a lot. That’s what Joshua has trouble with. He had him down, but these small guys coming in. I just think Wilder vs. Ruiz is a brilliant fight. Hopefully, we get to see that.

“Yeah, maybe. They’ve had two fights. It’s 1-1,” said Hearn when asked if there’s a possibility of a trilogy match between Joshua and Ruiz. “In the second fight, Joshua won every round. Ruiz may not have been at his best.

“It’s not a fight we’re looking at in the next two or three fights, but Joshua will fight anybody. Certainly, if Andy Ruiz beats Deontay Wilder, then why not?” said Hearn. 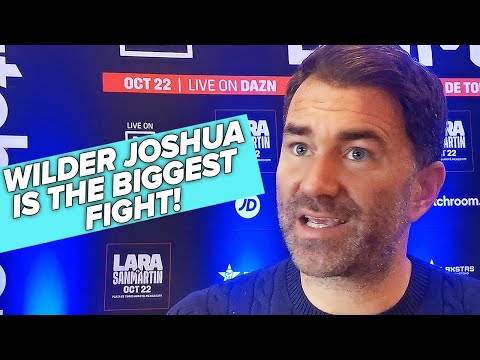 
« Bob Arum thinks fans want Fury vs. Chisora III: “You don’t have to sell anything”