It’s hard to take that comment at face value, given the generally weak opposition Ramirez (44-0, 30 KOs) has faced during his 13-year-old pro career.

Zurdo Ramirez will be challenging Bivol for his WBA 175-lb title on November 5th on DAZN at the Etihad Arena, Abu Dhabi.

The best thing that the 31-year-old Ramirez has going for him in this fight is his size. He’s essentially a cruiserweight, who is still able to boil down to make the 175-lb division.

To that point, Ramirez rehydrated to 203 lbs for his last fight against Dominic Boesel in May. Ramirez resembled a  cruiserweight inside the ring against Boesel in that fight, and that was enough for him to get the victory.

Bivol is coming off a victory over Canelo Alvarez last May, and he’s going to make it tough on Ramirez to impose his size in this fight. Bivol will be using movement and will make sure that Ramirez doesn’t have a stationary target to land his big shots in this fight.

“Yes, it is true, and my body feels strong. I feel really good at 175 pounds,” said Gilberto Ramirez to Fighthype about him being more aggressive at 175 than at 168.

“Everybody has been watching my fights and what I’ve been doing in the ring, and I feel glad for that. This is my body weight. I think I have to make it an exciting fight all the time, throwing a lot of punches.

“People from Abu Dhabi and all over the world, it’ll be an exciting fight, and I’ll get the [WBA 175-lb] belt. It should be [in California]. I don’t know what they’re doing in Abu Dhabi, but that’s fine.

“Anything, anywhere, I’m ready to take the belt because in the ring, it’s just Dmitry and me, and that’s why I feel comfortable anywhere. Yes, it’s got to make sense for everyone too.

“I don’t feel any issues. I feel comfortable at this weight. Like I said, this is my right weight at 175 pounds, and I will take this division. He has to deal with my reach and my intelligence. It’ll be a hard time for him,” said Gilberto about Bivol.

“Yeah, of course. You’re going to see Zurdo Ramirez trying to rip it [to the body], and it’ll be exciting. Don’t miss it. I’ve been in with so many fighters, and this is really important to me because it’s a title fight. I’ve been with really good fighters too.

“Not really. I’ve been in the ring with so many good fighters,” said Ramirez when asked if Bivol is the best guy he’ll ever face. “This is important for me because it’s a world title fight but I’ve been with really good fighters too.

“He has a good style, good footwork, and he has a good defense too, but now is the time to prove it with a different guy and a good fighter. No, I don’t think he’ll like it [the pressure].

“Yeah, he [Canelo Alvarez] did really well in the first six rounds, but obviously, Bivol did better, trying to take the distance all the time. But like I say, it’ll be totally different with me, Zurdo Ramirez.

“I think Canelo did well and everything he could in the ring, but I don’t think GGG deserves to fight again against Canelo because he didn’t do enough.

“For me, he did well. He pressured all the time and tried to win every single round,” said Ramirez when asked if Canelo is showing signs of determination. “GGG, he didn’t do enough. He just tried to survive the whole fight.

“I think the best have to fight the best,” said Ramirez when asked about his thoughts on Canelo, saying he doesn’t want to fight Mexicans. “After I beat Bivol, I don’t care if he’s Chinese or Mexican. We’re fighters, and that’s what we do, fight with anyone.

“All the time, it’s a war, an exciting show for all the fans. That’s why they have so many fights. Yeah, many times in Guadalajara,” said Ramirez when asked if he ever sparred with Canelo.

“I used to be a middleweight at the time, and it was a great experience for me. I was at middleweight, then super middleweight, and then light heavyweight. To me, it’s 50-50,” said Ramirez when asked who wins between Canelo and David Benavidez. “I like both of them, but I think it’s an interesting fight.

“Yes, of course. If he [Benavidez] moves up [to 175], eventually that fight will happen, and people want to see that fight too. We have to give the fans what they want.

“I think both are good but totally different style,” said Ramirez when asked who would be more difficult to prepare for, Canelo or Benavidez? “I think it’s a good match for everyone.

“I will win for sure, and it’ll be everything for me, all the goals I’m been trying to achieve because I want to achieve many goals. This is one of those [fights]. It’ll be an honor for me to represent Mexico and all the Latinos.

“Yeah, of course, I will revenge all of the Mexican people. Of course, that’s the fight that people want to see,” said Ramirez about a fight against IBF, WBC & WBO light heavyweight champion Artur Beterbiev for the undisputed championship. 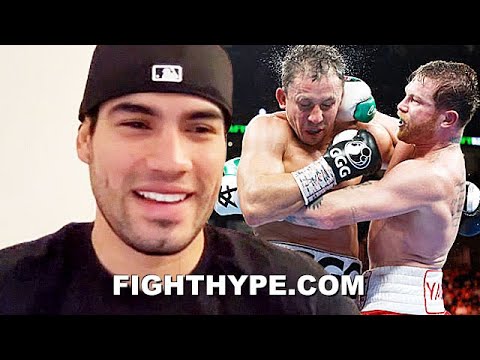