Kambosos’ career is basically on the line for this fight, as he’s expected to retire if he loses to Haney again. If Kambosos wins, he’ll have all four belts and a reason to keep his career going for a little while longer.

However, Kambosos is the underdog, and given the way he looked in a one-sided loss to Haney last June, the odds of him winning the rematch next month are slim.

Haney, 23, will again travel to Kambosos’s neck of the woods to fight him in Melbourne, Australia. The pro-Kambosos crowd didn’t help him last time against Haney, and they’re not expected to make a difference this time around either.

Kambosos got lucky with his victory over an ill and injured Teofimo Lopez in November 2021. Talk about being in the right place at the right time.

When Kambosos faced Haney last summer, his true limitations as a fighter were exposed for the world to see. In the rematch, it’s probably going to be worse for Kambosos because Haney is sitting down on his punches a lot more, and he’s expected to take the fight to him this time around rather than boxing.

“To see Devin accomplish his dream to become undisputed, but to do it in a relatively short time at 23 years old,” said Bill Haney to Fight Hub TV.

“Now, to go back across the pond to defend it. Only a very few, if any, have done this. He knows exactly who he is and exactly what he’s here for his purpose. Once you have your purpose, then you have you’re plan.

“It’s that age; it’s that time, you know what I mean? It’s that summer, and things are clicking. He’s healthy,” said Bill when asked about Haney looking for explosive on the mitts. “We’re working on some things in the camp that we want to do different.

“When you talk about the first fight, even the world, including you and everyone else, didn’t expect that Kambosos and him to engage the way that he did. We don’t know what George Kambosos is going to bring.

“We know he’s a desperate man, a hungry man, a man that has nothing to lose. Similar to when he fought Teofimo Lopez. You have to prepare all the tools, shine up everything to the best of your ability, and then let Devin make the adjustment on October the 16th to whatever George brings.

“The object is to win,” said Bill Haney when asked if the goal is for Devin to knockout Kambosos. “He’s on number 29. He’s young; he’s 23. We always say win is the thing that you want to do most.

“You can’t necessarily dictate what George is going to do. You have to make the adjustments. So you go in there, and you do that. You don’t go in there and necessarily look for the knockout. You let it come is how I learned the game.

“You don’t want to say harder because one thing, when they bring you harder, you get smarter. I know we’ll make the right adjustment. I don’t think there’s anything that he can do that Devin hasn’t seen before.

“It’s just about getting to the arena and making executions and performing, entertaining and having fun. We know that George is good for his one-liners and his quotes. They almost seem movie-related.

“This guy now that we know as George seems more out of the Rocky movie. He’s coming in with a chip on his shoulder; he’s doing less talking. It’s just about being prepared and ready to make the adjustment for him and now underestimating anything he’s bringing.

“When you’re walking through with your mental, there’s something the opponent does to make the adjustment the fighter makes. That’s what we love about the sport we’re in.

“You have a chance to see right here something we want to introduce on that night as well. We’re looking forward to it. God willing, both fighters make weight.

“It’s not been the most easy thing for Devin as well. We’re not ha-ha, hee-hee about George making the weight, either. You have two fighters that are true 135-pounders, if not 135-pounders moving up.

“Absolutely. For Vasyl and the world to find respect in Devin to be great for Lomachenko, that means everything in the world to us, coming from what we’ve come from to be right here.

“Absolutely, to go into big fights, whether there at 135 or where Devin is going at 140,” said Bill when asked if the plan for Haney is to fight Lomachenko if he beats Kambosos on October 16th.

“We’ve seen the Ryan Garcia’s, the Teofimo Lopez’s, the Tank Davis’s all fight at 140 pounds as well. That’s something we look forward to doing. Good times to be in the Devin Haney business.

“Everything has been lining up where we found success, and hopefully, that’ll continue to happen. This is a crazy, crazy business, this boxing business.

“Will we ever see Devin in the ring with some of those fighters?” said Bill when asked if Ryan Garcia and Gervonta ‘Tank’ Davis will ever fight Haney. ” I’ll tell you one thing is if they don’t fight Devin and they lose, you’re going to see us fight the winner.

“So it’s either going to be them or someone that beats them because all we want to do is be in the big fights. We saw the thing with Teofimo Lopez.

“You saw with Vasyl Lomachenko. We wanted to Lomachenko, and he wanted to fight Teo. He loses to Teo. We want to fight Teo, and Teo loses to Kambosos. Kambosos says he wants to fight Vasyl, but ended up having to fight us. So you see how things worked,” said Bill. 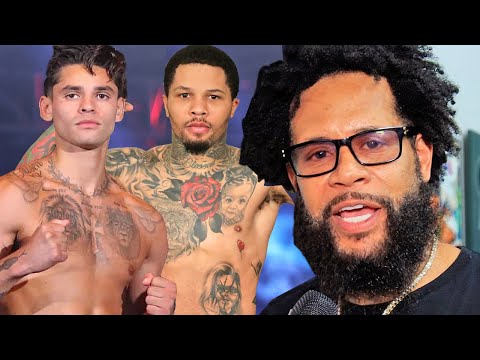 Usyk Interview: On fighting Joe Joyce and “Fury’s a Lunatic” »