By Jack Tiernan: Promoter Eddie Hearn says Chris Eubank Jr generally believes Conor Benn is an “easy fight for him.” This is why Eubank Jr (32-2, 23 KOs) is putting only 60% effort into training for the October 8th clash on DAZN pay-per-view at the O2 Arena in London, England.

Hearn notes that Eubank Jr does want to win, but he believes the recently turned 26-year-old Benn isn’t as big or as talented as him.

You can certainly admit that Benn doesn’t have the experience to be going up against a fighter in Eubank Jr’s class.

That much is obvious. Benn has fought nowhere near the same caliber of opposition as Eubank Jr, and on paper, he’s not really for this type of fight.

What gives Benn a chance of winning is the dehydration clause and the 157-lb catchweight. If Eubank Jr. is drained to the point where he’s 60% for this fight, Benn has got a chance of winning, as long as he doesn’t get clipped by one of Chris’s left hooks early.

Benn’s punch resistance isn’t that good, as we saw in his fight with Cedrick Peynaud. Also, Benn swells up when hit. If you saw what Benn looked like after his first fight with Peynaud, he looked like he’d been in a train wreck.

Both eyes were badly swollen, and his face was unrecognizable. This is from a fight against a non-puncher in Peynaud. Eubank Jr hits a lot harder than Peynaud, and he’s a far better fighter than him.

“Conor didn’t really care about the weight. He just wanted the fight,” said Eddie Hearn to Behind The Gloves. “This fight took three months to make.

“You’ve got to understand the history of the families. This is the biggest rivalry in British boxing, Benn-Eubank. I grew up in it because my dad promoted both fights. When you talk about making a fight between Fury and AJ. They don’t like each other, but they don’t hate each other.

“These two hated each other. For Nigel Benn’s career, Chris Eubank was the guy. As you saw with ‘The Gloves Are Off,’ it’s very similar to the two sons. Eubank is sort of posturing and coming out with some bizarre comments. That’s Nigel and the dad exactly the same.

“The second fight was a very controversial draw, and Nigel felt for many years that he should have won that fight. He probably should have, to be fair. It’s kind of been eating him up that it’s one nil with a draw.

“I feel like this means a lot more to the Benn family than it does the Eubank family. The Benns really want to win this fight. So does Eubank. Eubank does generally think this is an easy fight for him.

“He’s definitely taking him [Conor Benn] lightly. The 60% thing, I actually agree with. I don’t think he’s had a massive camp with Roy Jones Jr.

“I don’t think he’s had a long camp. He’s doing his own weight with a nutritionist. He just feels like ‘I’m much too good and too big for him. I’m going to knock him out.’ 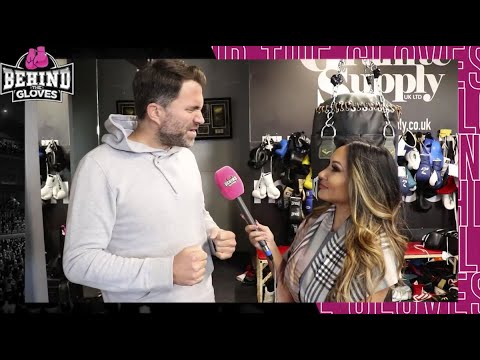