Eddie Hearn insists Canelo vs. Golovkin III “was a success”

By Jim Calfa: Eddie Hearn insists that last weekend’s trilogy fight between Canelo Alvarez and Gennadiy Golovkin was a success in terms of pay-per-view buys despite reports of disappointing numbers.

Dan Rafael reported that his sources told him that the Canelo-Golovkin III fight brought in between 550,000 to 575,000 buys. However, DAZN reported that the fight pulled in 1.06 million buys, which were global numbers.

Hearn feels that people with an agenda were behind the reporting of less than spectacular PPV buys for Canelo vs. Golovkin III.

“There are a lot of people in the industry with agendas. Maybe I have an agenda when I’m doing something. It’s that kind of business,” said Eddie Hearn to Matchroom Boxing.

“I haven’t watched it back. I don’t need to watch it back,” said Hearn about the Canelo vs. Golovkin III match. “The fight was a good fight. It wasn’t anywhere near as good as the first two fights.

“GGG definitely started slow, and then when he came back into the fight, later on, was that because Canelo had already won the fight, really? I couldn’t believe it was 115-113.  I struggled to give GGG more than two or three rounds.

“When you look back, maybe he won the first round, for example. Actually, not a lot happened in that round. I think it was a good fight, but it wasn’t as good as the first two fights.

“I thought Canelo boxed really well for the first seven or eight rounds. His movement was outstanding, and I think GGG was a little bit slow to get his shots off.

“Whether that’s the changing style that he’s had over the years, different trainers, and stuff like that. He’s fighting differently now. I think he might kick himself a little bit because he finished well.

“It’s a wrist injury,” Hearn said about Canelo’s left wrist. “This has been a problem for himself since the Caleb Plant fight. Going into the Dmitry Bivol fight, going into the Gennadiy Golovkin fight.

“Fighters will often mask the injury. They’ll get through it, or they’ll ice it, treat it. He’s been doing that, and I think he’s reached a stage now where he can’t do it anymore. So, he’s going to have to go have an operation on his wrist for the ligaments or tendons. Then he’ll be back.

“People talk about September. I don’t see that. I think he’ll be back in May. I spoke to him yesterday. He’d been playing golf, which he hasn’t really been doing that much in this camp. It feels good to be back with a win.

“Saul is always going to go where the fights are that he wants,” said Hearn when asked which direction Canelo goes for his next fight. “His main focus at the moment is Dmitry Bivol. Bivol has got to beat Ramirez.

“We’ve got a great relationship, not just with Saul but with Eddy Reynoso. That was the fifth Canelo fight we’ve done. That’s quite amazing. I look back over history.

“We did Callum Smith, we did Yildirim, we did Billy Joe Saunders, we did Bivol, and we did Gennadiy Golovkin. That’s an incredible run. It’s a joy to work with him; it really is. You learn a lot about life and boxing being around these people. You also learn about the simplicity of the team.

“Sometimes when you work with fighters, you see too many people, too much communication, too much noise, too much input. It’s really refreshing to see Saul and Eddy Reynoso. That partnership is key for any fighter.

“It’s student and teacher, and that’s how it works with them. It’s beautiful simplicity.

“Sometimes, you’ve got to get on the front foot in life. So when you’re sitting at home, and you see these muppets that are either fed false information, lying, or with an agenda, you want to bounce back a little bit, fight back a little bit.

“A lot of it was tongue in cheek. Then [Leonard] Ellerbe popped up, and I had to put him back in his box and say, ‘Not tonight, Leonard.’ I’m not going to let anyone talk s*** about me when I think they’re wrong. It’s a public platform.

“There’s a lot of talking points like pay-per-view numbers for GGG. DAZN came out and issued a statement on it. Over a million pay-per-view buys worldwide. What annoyed me is after the fight, hardcore fans are obsessed with purse bids and pay-per-view buys.

“We’re all hardcore fans. We want to know how our show performed. No one ever really releases those numbers. Once you start doing that, people expect it all the time. Dan Rafael got fed numbers by people with an agenda who wanted it [Canelo vs. Golovkin III] to fail.

“Those numbers were miles wrong. The problem is when you work for a big outlet. I had this conversation with Mike Coppinger the other day. He can’t report pay-per-view numbers based on me, Stephen Espinoza, or Leonard Ellerbe telling you a number that they heard it did because they’re credible outlets.

“Dan Rafael at the moment isn’t with a big outlet, so he can say whatever he wants. So he took a punt to give you a number, but the number was well out. Then when DAZN came back and said it did over a million pay-per-view buys. He came back and said, ‘Yeah, yeah, yeah, well, have of that was in the U.S.’

“No, no, no. Don’t be ridiculous. A huge proportion of that was in the U.S because, don’t forget, this was an obscure start time at four o’clock in the morning in Europe, Australia, and key markets.

“You’re talking about tens of thousands of buys from these smaller markets, and the event wasn’t available on pay-per-view on DAZN in the biggest markets. Mexico, Latin America.

“So Dan was miles wrong. He couldn’t quite take it upon himself. Then he started saying, ‘Well, did the pay-per-view cover the main event purses?’ What the f*** does that have to do with you? Absolutely nothing at all. We pay the bills. DAZN pays the bills

“By the way, what about the gate? He comes out, ‘The gate was $24 million.’ The gate was $22 million for this one. By the way, that’s publically reported information. People are obsessed with how the fighters got paid and how the match worked out.

“I think, on the whole, the numbers were solid. I think they were a little bit below DAZN’s expectations in the U.S, probably. Still, nowhere near the reported number from Dan Rafael, and that’s annoying and upsetting that you’d take the word from someone with an agenda. So we had to put it right, and DAZN put it right.

“On the one hand, people are saying, ‘DAZN doesn’t have a lot of subscribers globally.’ Then Dan Rafael is saying that it did 450,000 buys just globally. I thought we didn’t have any subscribers. Now all of a sudden, people are buying pay-per-views on DAZN globally.

“Really, none of it really matters in the slightest, but in the passionate world of fight fans, sometimes you’ve got to let people know. I think the fight was a success. It certainly was at the gate. I think the pay-per-view numbers globally were as well.

“Last night with Leonard was all right. He said he wanted to do the ‘no sunshine song.’ I told him that he carries Floyd Mayweather’s jockstrap. He told me that if I ever needed him to put on a big event, let him know.

“I said he could have gotten me some coffee from Starbucks. Leonard Ellerbe will say, ‘Eddie Hearn is a joke.’ Look at the resume, look at the pictures. Go on my Instagram and look at Madison Square Garden sold out, T-Mobile sold out, Saudi Arabia sold out, and Brisbane sold out.

“We’re a huge global business, and it was alright with Leonard last night. I think he’s starting to understand sarcasm and banter, which I think will help him a lot as a person as well.

“Would we fight? How many buys would that do? It’s an interesting one because I can’t really fight, but he’s quite old. Me and Leonard would probably do a million buys worldwide. 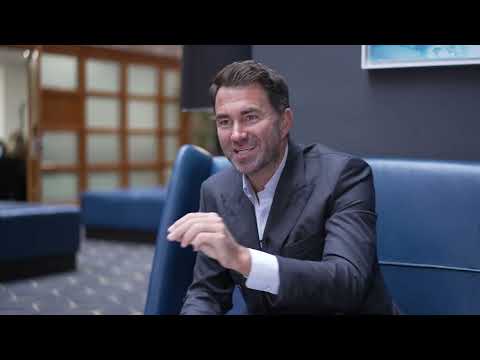