Deontay Wilder says if Ruiz is next, so be it

By Robert Segal: Deontay Wilder is open to fighting Andy Ruiz Jr next following his 12 round unanimous decision win over Luis Ortiz in a WBC heavyweight title eliminator last night in Los Angeles.

Wilder (42-1-1, 41 KOs) is facing Robert Helenius next in a second WBC title eliminator next month on October 15th.

The WBC president Mauricio Sulaiman said recently that his organization would decide which of the two mandatory challengers from the Ruiz-Ortiz and Wilder-Helenius fight will battle for the world title against champion Tyson Fury.

What could happen is the winner of those two fights will meet to decide who battles for the world title. Wilder says he’s not going to duck any fighter, as he wants to fight the best.

If that means Ruiz is the next guy Wilder faces, he’ll be ready & willing to take that match-up, provided he beats Helenius on October 15th.

“I’m on a tear for whatever and whenever. Deontay Wilder is back, and I don’t duck no fights,” said Deontay Wilder to Fight Hub TV when asked if he’ll be fighting Andy Ruiz Jr next.

“If that’s [Ruiz] the most exciting fight after I handle business, so be it, let it be. I’m willing and ready and able. They all know that. Everybody in the heavyweight division knows what Deontay Wilder brings,” said Deontay.

Ruiz (35-2, 22 KOs) had all he could handle against 43-year-old Ortiz (33-3, 28 KOs) last Sunday night, squeaking by with a narrow 12 round unanimous decision, despite having knocked the Cuban fighter down three times.

When you drop an opponent three times and you still barely win, as we saw with Ruiz, it’s a sign that you’re boxing skills are lacking.

If Wilder is able to land the same kinds of shots that Ortiz did, it’s going to be a blowout win for the ‘Bronze Bomber.’ Ruiz cannot afford to get hit by Wilder as many times as Ortiz did.

“I’m willing to die for what I believe in, and that’s what I bring to the table,” said Deontay. “That being said, I’m ready to go. They fear me, I don’t fear them, and that’s the difference.

“This second reign is all about me being happy, and that’s what I’m going to display in the ring.

“You can always expect great fights where you’re at the edge of your seats when Deontay Wilder gets in,” said Wilder. 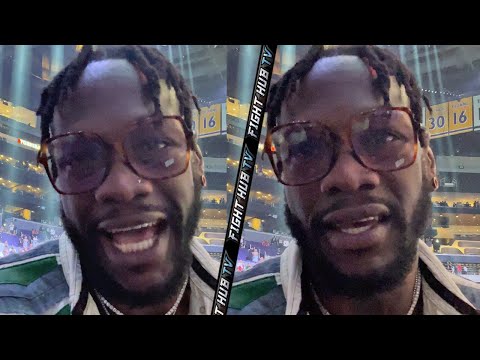