Canelo lets Golovkin know he’s knocking him out on Saturday

By Adam Baskin: In today’s final press conference in Las Vegas, Canelo Alvarez politely let challenger Gennadiy Golovkin know that he’s going to knock him out this Saturday night in their headliner at the T-Mobile Arena.

It’s going to take a superhuman effort on Canelo’s part for him to knock out Golovkin because he’s got a steel chin, and he’ll likely be letting his hands go to keep the Mexican star busy defending.

Golovkin’s weakness is taking punches to the body, and Canelo and his trainer Eddy Reynoso are likely going to focus their attention on that area. Sergiy Derevyanchenko and Ryota Murata both hurt Golovkin with body shots and had him looking on the verge of a knockout.

Canelo vs. Golovkin event will be shown on DAZN pay-per-view this Saturday night at 10:00 p.m. ET. In the co-feature, WBC super flyweight champion Jesse ‘Bam’ Rodriguez will be facing Israel Gonzalez in a 12 round bout.

“The pressure that I put on myself is to finish this inside 12 rounds,” said Canelo Alvarez during Thursday’s final press conference for his fight against Gennadiy Golovkin.

“It’s going to be very difficult, but nothing in life is easy. I always look to achieve what’s difficult. I’ve been very excited and motivated during my training camp to try and finish this before 12 rounds,” Canelo continued about his goal of knocking out Golovkin.

“I’ve got a very strong and tough opponent in front of me, but that will be my aim on Saturday night.”

“There will be thousands of fans here tomorrow for the weigh-in at the packed T-Mobile Arena. It’s Mexican Independence day as well.

“I want to thank Canelo Alvarez and Gennadiy Golovkin and both teams because, in boxing, we need great rivalries. These are two of the greatest champions of our generation,” said Hearn.

“This is going to be very difficult, but that’s what I want, and what I want to accomplish on Saturday night,” said Canelo. 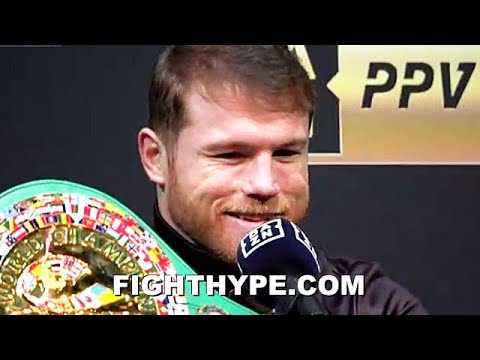 
« Canelo Alvarez on loss to Bivol: “He didn’t beat me by being better than me”

Jamaine Ortiz Is Ready To Play The Spoiler Role »