By Barry Holbrook: Amir Khan says he believes he would have beaten Floyd Mayweather Jr if the two fighters had fought in their primes.

Khan could be right about his opinion because he had the speed, power, and advantage in his ability to throw combinations. Additionally, Khan had the footwork to get in and get out to land his speedy punches against Mayweather, who lacked the kind of power to bother him.

During his career, Khan repeatedly attempted to set up a fight with Mayweather but with no luck. Mayweather didn’t want the fight, so he put Khan on ignore and focused on slower fighters like Robert Guerrero, Marcos Maidana, and Andre Berto.

“I’d beat him. Honestly, I’d beat Mayweather. I’m going get a lot of hate for this, but you have to believe in yourself… It would’ve been like chess, but I would’ve outboxed him,” said Amir Khan to The Overlap about his belief that he’d have beaten Floyd Mayweather Jr in his prime.

It’s a real shame the Mayweather vs. Khan fight didn’t happen because it would have made a lot of money for both fighters. There was a lot of interest from the boxing public in a fight between Mayweather and Khan, but Floyd wouldn’t do it.

That goes with the cherry-picking reputation that Mayweather had of making sure he fought only guys that he was 100% certain he could beat them. If he wasn’t certain, the fights didn’t happen.

Khan only had problems with fighters with big power like Breidis Prescott, Canelo Alvarez, and Danny Garcia during the prime of his career. Mayweather couldn’t crack eggs with his shots in the 147-lb division, so Khan would have had a huge advantage over him with his hand & foot speed.

It’s safe to say that Mayweather knew what time it was. Hence, he wants no part in fighting Khan, even though he would have made a mountain of money from the fight.

Mayweather was smart enough to realize that the loot that he would have made from the Khan fight wouldn’t have been worth it because he would have lost the fight.

Floyd brought in a new era of fighters who carefully selected their opponents, avoiding risky guys at all costs. Mayweather arguably hurt boxing with his cherry-picking and his garbage exhibition fights, which are the forerunner to the trash Youtuber boxing. 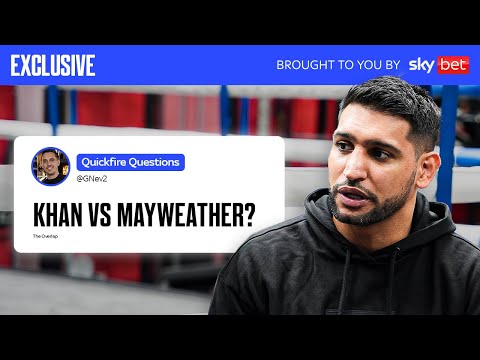 
« Luis Ortiz: “I’m going to be looking for a knockout” of Andy Ruiz