By Sean Jones: Trainer Abel Sanchez puts David Benavidez in the rare category of a fighter that can beat Canelo Alvarez.

Sanchez says Benavidez (26-0, 23 KOs) and his dad Jose Benavidez Sr, need to stop pressuring Canelo for a fight because he’s in a position where he can fight anybody right now and make good money.

According to Sanchez, Benavidez needs to keep winning and let that put pressure on Canelo rather than complaining to the media about the Mexican star ignoring him.

Sanchez feels that Canelo will eventually fight Benavidez in three or four years. That’s wishful thinking on his part because Canelo has already said that he doesn’t want to fight Mexican fighters.

“I think Canelo is in a position where it doesn’t matter, and he doesn’t give a s*** what anyone says,” said Abel Sanchez to Fight Hub TV when asked if Canelo Alvarez will fight David Benavidez.

“Canelo is in a position where he can fight a guy off the street, and he’s going to make a lot of money. So what people say doesn’t really matter to him, in my opinion.

“What David needs to do is continue to stay busy. Be a shadow instead of talking so much. Jose [Benavidez Sr], I love him; he’s a good friend of mine, but it’s not going to happen the more they talk.

“Canelo is in a position where the more you talk, ‘the less I’m going to think about it.’ So just stay busy, just keep winning. Let the natural part. Canelo is only 32 or 33, and the other kid [Benavidez] is 25 or 26. So it’s going to happen two or three years down the road. Quit pushing it.

“Just fight the guys your fighting, and eventually, that fight is going to happen. That’s why the Canelo-Golovkin fight didn’t happen earlier because Golovkin’s people kept pushing and pushing. Keep talking, keep talking.

“Canelo is in a position where ‘It’s okay. Keep talking.’ What difference does it make? He’s the one in charge.  Same as Floyd when he was in his heyday. He’s the one that was in charge. He dictated terms, and he dictated when and how.

“I just think David needs to stay busy, and that fight will happen. It will happen. Maybe towards the end of Canelo’s career, but it will happen. I don’t think there’s anybody up there other than Bivol and Beterbiev.

“At 168, there’s nobody that can touch Canelo other than Benavidez. No,” said Sanchez when asked if Jermall Charlo could beat Canelo. I don’t think he’s [Jermall] is busy enough.

“As it was in his last fight and even the other Charlo [Jermell]. When it gets thick in there, they’re not resilient. They don’t come out and get it. They coast and try to just get over the fight and win.

“I’m not going to say they have no heart because all fighters that climb through the ropes have a big, big heart. They got the biggest cajones ever.

“When it gets thick in there, he [Jermall Charlo] doesn’t perform as well as he should. When he has the upper hand, he’s a killer, but in the fights that I’ve seen where it gets tough in there, he doesn’t step up to the plate as he should as the champion he is.

“Listen, when the WBC made Gennadiy after he beat Rubio and Canelo dropped the belt. That’s the pressure that David needs to put on this guy.

“Make him drop the belt but not by talking by deeds. Make him have to answer questions like he did that night when he was upset. But David’s not in that position yet to force him.

“He needs to continue to do that to force him.  He will; he’s a young kid. The more he pushes is just like what happened with Golovkin and Canelo. Canelo will say, Well, keep it.’ I don’t need it.

“He doesn’t need it. If he fought without a belt. If he fought for the Ring belt, he’s going to make the same kind of money, so what difference does it make?

“My only drawback to liking him [Bivol] a lot is that all his fights were safety first. I said the only thing that would be difficult for Canelo was if Bivol came out of his shell.

“He doesn’t fight a safety-first fight, and from what I understand, that’s exactly what he did. He attacked Canelo; he beat Canelo to the punch, and he out-muscled him, out-powered him.

“Bivol, in my opinion, went out of his comfort zone. Back then, I said Golovkin, Beterbiev, and Benavidez were the only three that I thought were a threat to Canelo.

“I think Benavidez is a threat. Now that Bivol has beaten him at a higher weight, that’s the only difference; Benavidez is a genuine threat, in my opinion.

“No,” said Sanchez when told that Jose Benavidez Sr said David would beat Canelo in seven rounds. “David has gone into the 12th round with guys that are half Canelos.

“Think back. Yeah, they were undefeated, but they were half the fighter of Canelo. That boy that he landed a great combination in the 12th round, what the heck was his name? The Romanian [Ronald Gavril].

“Gavril, yeah. It took him [Benavidez] 12 rounds to get him out of there, and that guy is nowhere near Canelo. David would do well, he may beat Canelo, but he’s not going to stop him. Just like nobody is going to stop Golovkin unless you hit him with a hammer or shoot him.

“Now that Canelo really dominated him, ‘Oh, he’s fighting a 40-year-old man.’ You can’t win. As a fighter, you can’t win. That’s why I say Canelo is going to do what he has to do for Canelo.

“It’s the same as Golovkin. Golovkin is going to 160 pounds and control the division. But David has a legitimate chance of beating him [Canelo] because he can outbox him.

“He can do what Zurdo may do to Bivol. He’ll outbox him from the outside because he is the bigger man and has a longer reach. David has got to be 6’3” or something like that.

“Great reach, great reflexes, great upper body movement. In fact, David was in my gym when he was 16 years old and sparred with Golovkin in 2010 and 2011.

“I would say of all the fighters that I’ve had in my gym sparring with Golovkin, David is probably the best. 16-years-old. He sparred a lot. Golovkin took care of him and didn’t abuse him, but you could see the talent was there. 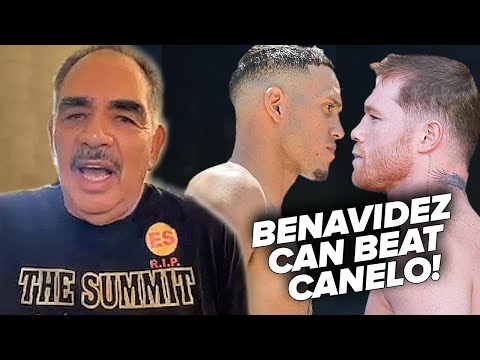