By Jim Calfa: Tyson Fury took to social media on Tuesday to give Anthony Joshua the key to defeating Oleksandr Usyk by attacking him to the body with a prolonged flurry of shots.

The basic problem with Fury’s advice is that it will require Usyk (19-0, 13 KOs) to stand still, immobilized in the center of the ring or against the ropes, for Joshua to get off his body shots.

Given the mobility of Usyk, it’s not practical for  Joshua (24-2, 22 KOs) to pay any attention to Fury’s advice because it would be helpful against a different type of fighter.

You can’t blame Fury for wanting to give Joshua pointers, as he desperately needs him to win to get the massive payday fight between them later this year. If Usyk wins, there’s not as much money for Fury fighting him, and he’d likely lose anyway.

“Usyk has got everything. You can rock up this week and smash & grab and win all these world heavyweight titles. The Ring Magazine belt included,” said Eddie Hearn to Boxing UK.

“Come into this feeling like a challenger. Be friendly and speak to everybody, but smash & grab time. For years, it’s been the  AJ roadshow. Sell out Wembley, and it doesn’t matter where he fights.

“Now, come in as the B-side, the underdog. People are writing you off. So how big will this be if you can do this if you can win this fight? Its going to be massive. One of the biggest British fights of all time. 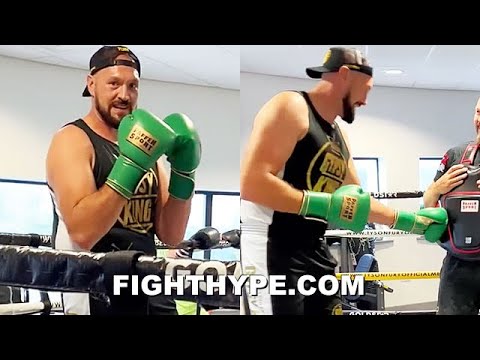 “History, that’s what he’s here for. I’m absolutely buzzing right now. People say, ‘You got to be more aggressive.’ Yes, he does, but he’s got to be smart.

“The key to this fight, in my opinion, is once that sixth round bell goes, this guy [Usyk] has got to be out of there or damaged or in a place where he wishes he’ll never want to go back to again.

“You let this guy get into a rhythm; he could be unbeatable. If you let this guy drain you or make you do things with your feet that you never done before, you’re not going to win this fight.

“You got to hit him hard to the body, the shoulders, the neck, and you’ve got to damage him,” said Hearn about what Joshua must do on Saturday.


« Joshua says he would have beaten Usyk with aggression