By Dan Ambrose: Ryan Garcia says it will be “bad for” Gervonta ‘Tank’ Davis if the two mix it up in December. However, at this point, it’s questionable whether the fight will happen between the popular social media star Garcia (23-0, 19 KOs) and Tank Davis.

It’s more likely the 23-year-old Ryan Garcia will wind up facing someone else at either 135 or 140 for his next fight. He must cut his teeth against A or even B-level opposition before facing a talented former three-division world champion like Tank Davis (27-0, 25 KOs).

Ryan is coming off a sixth-round knockout win over the old-timer Javier Fortuna last July in Los Angeles. Like many of Ryan’s other opponents, Fortuna was past his best old veteran, who Joseph ‘Jojo’ Diaz had recently beaten.

“I can’t wait for you guys to see what I do to Tank if that goes down. It’s going to be very bad for him,” said Ryan Garcia on Social media. “I should have an update on my fight for you guys soon.

“It should be happening in December if all goes well. It’s going to be amazing. Trust me; I got this. I’m going all the way,” said Garcia.

The things that Ryan is saying are similar to what Rolando ‘Rolly’ Romero said before he fought Gervonta recently and was promptly knocked out.

Ryan could help himself if he started fighting notable opposition in the top five rather than fishing for old depleted fighters on their last legs.

The Golden Boy promoted Garcia needs to prove himself against top-grade opposition to show that he’s not just a hybrid Youtuber boxer like Jake Paul.

Ryan should fight these guys before mixing it up with Tank Davis:

It’s highly questionable whether Ryan could beat any of those fighters on that list. Most of those killers would expose the flaws in Ryan’s game, mainly how he fights with his head straight up.

For Ryan to be seriously ready to share the ring with the likes of Tank Davis, he would need to get experience against those types of fighters before he would have any chance of winning.

It seems Ryan is in a hurry to get a big payday against Tank Davis before he’s found out. 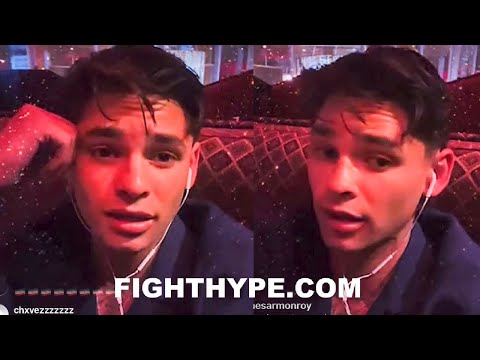 
« How A Boxing Writer Fell In Love With the sport!