By Brian Webber: Caleb ‘Sweethands’ Plant says he gained “experience” from his recent fight against Canelo Alvarez last November in a losing effort. Plant, 30, was knocked out in the eleventh round by Canelo after running out of gas.

Plant (21-1, 12 KOs) feels he can use the experience that he gained from the Canelo fight for other big contests for him in the future.

The Tennesse native Plant will be taking on Anthony Dirrell (34-2-2, 25 KOs) next on October 15th on FOX Sports PPV at the Barclays Center in Brooklyn, New York.

Plant wants to ramp up for a rematch with Canelo, but he recognizes that he’s going to need to keep winning until the Mexican star looks his way. For a second Canelo-Plant fight to sell, Plant will need to beat a credible contender like David Benavidez or WBA ‘regular’ champion David Morrell.

“Just experience. I felt I was well prepared and did well in the fight and just experience. That’s something that you can’t buy,” said Caleb Plant to Fighhype about what he gained from fighting Canelo Alvarez.

“That’s the experience I can take with me with these other big fights that are on the way.

“I have no thoughts on what he does, how he carries himself, and what he wants to do. That’s entirely up to him. I ain’t got no say on it,” said Plant when asked about his thoughts on Canelo, saying this week that he won’t fight any Mexican fighters.

“I’m not really focused on what he brings to the table. I’m just focused on what we got to do and continue to tighten things up,” said Plant about his thoughts on Anthony Dirrell.

“I’m obviously something and somebody to him. Why he hates me, you have to talk to him about that. I can’t tell you why he feels the way he feels. 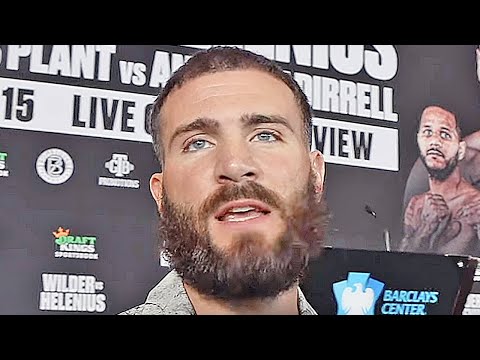 
« Anthony Dirrell says Caleb Plant will be on his bicycle on Oct.15th

Deontay Wilder’s trainer wants Joshua or Usyk next after Helenius »