By Jack Tiernan: Andy Ruiz Jr is looking like a machine in training camp for his WBC heavyweight title eliminator against Luis Ortiz on September 4th on FOX Sports  PPV at the Crypto Arena in Los Angeles.

In Ruiz’s only fight since losing his three heavyweight titles against Anthony Joshua in 2019, he labored to an unimpressive 12-round unanimous decision against Chris Arreola last year in May.

The 40-year-old Arreola decked Ruiz in the second round and had him badly hurt. It’s fair to say that if Arreola could do that to Ruiz, Ortiz can as well.

After the fight, Ruiz’s fans argued that he’d taken too much weight off in training for the Arreola match, and that’s why he didn’t look so impressive. 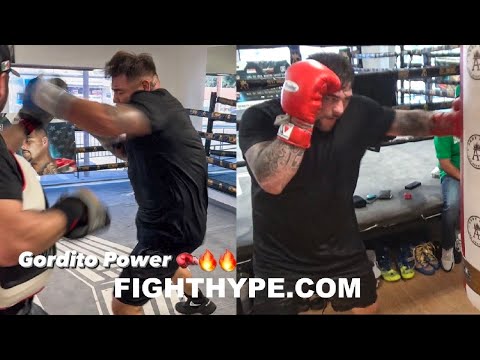 Losing that amount of weight would negatively impact any fighter’s performance, especially if they’d been partying & eating the way Ruiz had.

“He didn’t look good against Chris Arreola, and he got hurt badly,” said Teddy Atlas on The Fight about Andy Ruiz Jr, putting in a subpar performance against the 40-year-old Chris Arreola last year.

“[Luis] Ortiz punches at least as hard as Arreola, and Arreola was older too. Arreola had been on a losing streak and not near his prime. Nobody thought he would give [Ruiz] a run for his money, and he sure as hell gave him a run for his money,” said Atlas.

In some ways, Ortiz is a bigger puncher than Arreola because he’s a southpaw, and the shots that he catches his opponents with are ones that they don’t see coming.

“That was Ruiz’s first fight with his new trainers, and again, he didn’t look good. I think if Arreola can hurt him, Ortiz can hurt him. You never know when Ortiz really gets old. That’s kind of what we’re talking about,” said Atlas.