Espinoza says he’d like to get the Spence-Crawford and Gervonta Davis vs. Ryan Garcia fights done this year.

Interestingly, he feels there’s a more straightforward path to getting the Spence – Crawford fight done than the Garcia vs. Tank fight, in which he revealed that talks haven’t started for that match.

IBF/WBA/WBC welterweight champion Spence (28-0, 22 KOs) and WBO champion Crawford (38-0, 29 KOs) must get the fight done this year because both fighters will need to defend against their mandatory’s next year if they choose not to move up in weight to 154.

With contenders Jaron ‘Boots’ Ennis, Vergil Ortiz Jr., and Conor Benn closing in on Spence & Crawford, these two champions must fight this year.

“Everyone wants to know about Spence-Crawford, and hopefully Ryan Garcia and Tank Davis as well. I can’t promise either one of those. I feel pretty confident that we can get to Spence – Crawford before the end of the year,” said Stephen Espinoza of Showtime to Secondsout.

“If we’re able to get Spence-Crawford done, that’ll be two fights for undisputed titles this year as well. The path is much clearer to Spence-Crawford [than Ryan Garcia vs. Gervonta Davis].”

“It’s an excellent fight. I think it’s a tough fight for both guys. I’ve always favored Crawford in the fight, but I think it’s a winnable fight for Spence as well,” said Tim Bradley to Secondsout about the Spence vs. Crawford fight.

“I’d say Spence probably has the best basics in boxing. A great jab, he stays behind it, and he has great fundamentals. He’s a tremendous puncher to the body and a great inside game, and he’s consistent with it.

“Every single round, he’s consistent with it. That’s tough to deal with. You’ve got something in your face all night. A guy that is going to be in your grill, a guy that is going to try and rest on the inside and chop you up into pieces down to the body,” said Bradley about Spence.

“I would expect Crawford to move. Crawford, I feel, has better feet. I think he’s a better boxer and a better counter puncher as well. I think he can use that to his advantage in the fight.

“He’s a little bit longer than Spence as well, and he has power, sneaky power. He has strength as well, and he’s not going to stand there and let Spence hit him down to the body.

“He’s going to move and use angles. Any mistakes Spence makes, you can expect a counter. It’s going to come, and Crawford being a great counter puncher, I’m going with him. My money is on him, but I think the fight is going to be extremely entertaining.

Whoever executes the game plan, to be honest with you, is going to win the fight,” said Bradley about the Spence vs. Crawford unification match. 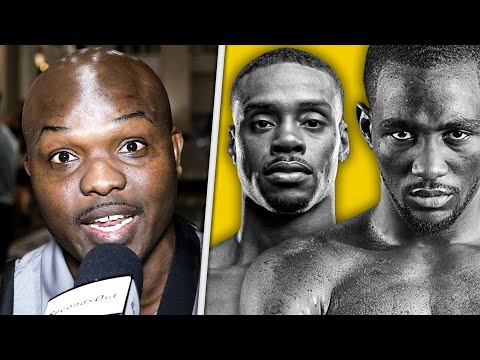 Tim Tszyu on Jermell Charlo: “I want to cause him pain” »