By Robert Segal: Ryan Garcia insists that he’s 100% focused on Javier Fortuna for their 12-round headliner this Saturday, July 16th.

Fans believe the 23-year-old Ryan’s mind is elsewhere, dreaming about a huge pay-per-view fight against Gervonta ‘Tank’ Davis and talking endlessly about that match-up in every interview.

The money might be the reason Ryan Garcia (22-0, 18 KOs) is so amped up about fighting Tank Davis immediately, despite him lacking experience against top-level guys.

If Ryan’s career goes to pieces after his gimme fight against the 33-year-old Fortuna (37-3-1, 26 KOs) this Saturday, he’d at least have gotten a big payday against Tank Davis.

Up to this point, the only name fighter Ryan has faced is Luke Campbell, and he’d already been softened up ahead of time by Vasyl Lomachenko and Jorge Linares.

“I was looking at the fight where Tank, for some reason, when he’s up against guys that he’s supposed to be, he gets tagged up a lot,” Garcia said.

“If you have mental health problems and then you pull out of a fight with Javier Fortuna, I believe it was, and then in the next second, I see you at the Logan Paul – Mayweather press conference in the Paul entourage just clowning around, I don’t know, bro,” said Paulie Malignaggi to ProBox TV about his belief that Ryan Garcia lacks the desire to be the best.

“I don’t know what mental problems you are there because you’re obviously out in the open; you’re clowning around, having fun, which is fine. You’re not taking a break from anything. You just didn’t fight [Fortuna].

“When I saw that, ‘I’m like, does this kid [Ryan Garcia] want to fight or does he just like this life? It’s fine. If you like this life, it’s fine. You’ve earned it and obviously have been able to do it through your social media platform and all this modeling stuff.

“He’s very profitable; he’s a very, very promotable kid. I guess you can take it a little bit as a criticism, but it’s also because I see a lot of potential in Ryan Garcia. I think it’ll be a waste if he doesn’t at least give himself a chance to live up to it.

“Canelo, you criticize him for the Matthew Hatton fight, but Canelo ended up fighting everyone at a certain point. He fought them all,” said Malignaggi.

Is Ryan committed to boxing?

“We don’t have time to be talking about no depression. We’re talking about life, do you understand me? We’re doing this because this is our way out of all the stuff that is stopping us from making it.

“It’s mental issues where you show up at another fight, and you all have. No, bro. That’s not boxing,” said Jones Jr about Ryan Garcia.

“So for me, you got to show me something different because if you’re not committed to boxing because we don’t have college degrees. We don’t have time for that. Most of us didn’t have parents that could afford that.

“If you’re not making money and you can’t pay the bills, you’re going to have a lot more issues,” said Malignaggi. “You’re going to get more depressed.”

“That’s what I know, so I don’t know what kind of depression that he’s [Ryan Garcia] talking about,” said Jones. “That don’t exist in the boxing school that I come from.”

“It’s a different generation, Roy,” said Malignaggi. “Again, we’re not psychiatrists. So nobody should take what Roy said and get offended for it because it’s really not an offensive thing. It’s more about you coming from a different perspective, a different point of view.

“You have to be willing to understand that point of view. Ryan, if he has those mental issues, the lights are still getting paid because he’s getting paid so much money for all his endorsements anyway.

“So then you figure out a way to win, then you’re not depressed because you win, and when you win, you’re in a good mood, and you get addicted to winning.

“When you have so much [money] coming in from so many different places like Ryan has earned, let’s get it right. He has earned all these acclaims outside of the ring. It’s a lot easier for him to say, ‘Let me step aside.’

“But for me, I saw him [Ryan Garcia] at the Logan Paul-Mayweather press conference right after; that’s when I started questioning a lot of things,” said Malignaggi.

The tools are there

“By the way, that was the bad side. The good side is he has all the necessary tools to become one of the best fighters in the division,” said Roy Jones Jr about Ryan Garcia. “That’s what hurts the most.”

“I don’t think there’s a guy on the record of Gervonta Davis or Devin Haney that they’ve beaten that is better than Luke Campbell because you can’t judge Luke Campbell by the world titles he’s won because his two title shots came against a prime Linares and a prime Lomachenko.

“So Luke Campbell, with an Olympic gold medal, that was a really difficult opponent. You could see it in the fight. [Ryan] Garcia was in trouble.

“When I saw him come through that and the way he came through that, I said, ‘I’ve seen everything I need to see. I believe in this young man.’ Everything that happened afterward made that belief kind of fizzle.

“You see it there, and we see it there. We don’t know if you see it there because you’re not believing in yourself enough. Your actions are speaking louder than your words. Let’s see what happens,” said Malignaggi about Ryan Garcia. 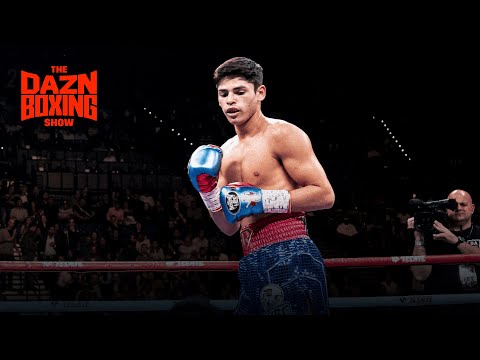 
« Rey Martinez vs. Sunny Edwards negotiations close to being done for Oct.22nd