Shakur Stevenson says Lomachenko fight can happen at start of 2023

By Brian Webber: Shakur Stevenson says he’d like to defend his WBC/WBO super featherweight titles against Vasyl Lomachenko in early 2023.

Lomachenko is returning from the war in his homeland and will be fighting in October against a still-to-be-determined opponent. Shakur will defend his two 130lb belts against Robson Conceição (17-1, 8 KOs) on September 23 at the Prudential Center in Newark, New Jersey.

That’s a risky fight for Stevenson because he’s never fought anyone close to Lomachenko’s talent level, and he might not be ready for that step up in class.

Shakur feels that two-time Olympic gold medalist Lomachenko isn’t fighting at his “natural weight” right now, with him campaigning at 135. Lomachenko already lost to Teofimo Lopez in 2020 in a fight in which he was vastly outsized by the New Yorker.

Teofimo, who has always been huge for a lightweight, looked like a 154-pounder after rehydrating the night of the fight.

Of course, some people feel that Shakur Stevenson is a natural lightweight, and he’s only fighting at super featherweight because he has a size advantage over the smaller fighters in that division.

“We can do that fight whenever. He’s a big enough name,” said Shakur Stevenson to Thaboxingvoice when asked if he’d be interested in fighting Vasyl Lomachenko.

“He’s got a big name, and he’s been in the pound-for-pound rankings. You’ve got to respect him for that. We can make that fight happen at the beginning of next year.

“At the moment, we’re not at the same weight,” Stevenson said about him and Lomachenko. I’m pretty sure I’m a champion right now. He can come down to 130 right now, and it would be a huge fight.

“I feel like 135 is not his natural weight,” Shakur said about Lomachenko. “130 seems like a more realistic weight class for him. We’re about the same size anyway.

“I’m so confident in myself. They say, ‘He’s cocky.’ I don’t care because I feel like I can beat anybody; I don’t care who it is. They can ask me anybody on the planet earth; I’m going to tell you I can beat them because I can figure out a way to win.

“Jared is a very important piece to my training camps to getting ready because he comes in here and really pushes me. Me and Jared spar sometimes, and I hit the mitts with him. We helping each other get better.

“Being around him, I see little things he does, and I take from him. Him being around me, you can see him trying to take some things from me.

“We pushing each other to get better. You don’t want to be in the gym without another special fighter in there with you, and you’re going to learn from watching that person,” said Shakur. 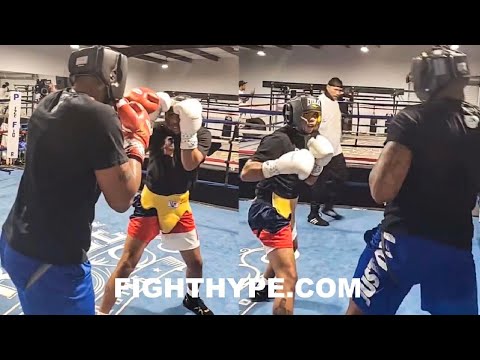