Atlas notes that Ruiz (34-2, 22 KOs) didn’t perform well in his last fight 14 months ago against 40-year-old past his best Chris Arreola and was dropped & badly hurt in that fight.

Ruiz had lost a lot of weight for that fight, timing down from 313 lbs to 256 lbs, and it may have taken away some of the punch resistance he’s known for during his career.

Atlas feels that the 43-year-old King Kong Ortiz (33-2, 28 KOs) punches just as hard as Arreola but has the technical skills from his background from fighting on the Cuban national team to give Ruiz problems on September 4th.

Ruiz is ranked #5 WBC and #12 WBA, and he needs a victory over Ortiz to move him up in the rankings to get a world title shot. His fight with Ortiz is two years overdue, as it was a fight that was talked about in early 2020.

It’s unclear why it’s taken Ruiz so long to get around to fighting Ortiz, but his handlers may have been apprehensive about making this match.

Many boxing fans would have picked Ortiz to defeat Ruiz two years ago, but not now. Ortiz looked poor in his recent come from behind sixth round knockout victory over 36-year-old former IBF heavyweight champion Charles Martin on January 1st.

Martin dropped Ortiz in the first and fourth round before charging back to score two knockdowns in the sixth to get the stoppage.

Ortiz is ranked#2 IBF, #5 WBO, and #8 WBC, and he could increase his chances for another world title shot if he defeats Ruiz on September 4th.

The Ruiz vs. Ortiz fight organizers has wisely staged the contest ahead of the September 17th clash between Canelo Alvarez and Gennadiy Golovkin, which will be shown on DAZN PPV.

By scheduling Ruiz-Ortiz earlier in the month in September before the Canelo-Golovkin III match, it increases the chances that boxing fans will purchase the fight on pay-per-view.

If the handlers had staged the Ruiz vs. Ortiz fight after the Canelo vs. Golovkin 3 clash in September, fans would likely be reluctant to purchase it because they’d have already spent a lot of money on the Canelo-Golovkin trilogy.

“Ruiz is supposed to win that one. Ortiz is old like you said, and he loses to the top [guys] when he fought for a world title against [former WBC heavyweight champion Deontay] Wilder.

“He lost both of those fights,” said Teddy Atlas on The Fight, talking about Andy Ruiz’s match against 43-year-old Luis Ortiz on September 4th.

You can’t say that Ruiz is supposed to beat Ortiz because other than his victory over a fragile-chinned Anthony Joshua, he doesn’t have any victories that jump out at you on his resume.

Before Ruiz’s upset win over Joshua in June 2019, he was viewed as an average contender and nothing special. Nothing has changed in that regard, but his victory over Joshua gave casual boxing fans a warped view of his ability.

Hardcore boxing fans realize that Ruiz is a ham & egger heavyweight who does well against flawed fighters but falls apart when fighting A-level opposition. In other words, Ruiz could lose to Ortiz.

“He [Ortiz] represented himself pretty damn good, and he hurt Wilder in at least one of those fights,” said Atlas. “He’s a good puncher, a solid technical fighter, 43 years old, and has had a lot of amateur fights with the great amateur program that the Cubans have.

“He’s got all that pedigree going for him. Listen, Ruiz is supposed to win it, but he didn’t look good [against 40-year-old Chris Arreola last year in May 2021].

“Maybe he took off too much weight too soon; I don’t know. But he didn’t look good against Chris Arreola, and he got hurt badly against Arreola. I think Ortiz punches at least as good as Arreola, and Arreola was older too.

“He’s another guy, I love Arreola, and he’s another guy that said after one of his fights that he should retire. I think it was after he fought the Polish guy [Adam Kownacki] in the Garden [in August 2019].

“I thought he [Arreola] should retire. He gets hit too much and has been around a long time, Arreola. He’s taken a lot of punishment. He’s got a great heart, but I thought it was time. Then he comes back, and what’s he do? He almost knocks out Ruiz.

“That was Ruiz’s first fight with his new trainer [Eddy Reynoso], with Canelo’s people, and again, he didn’t look good, he didn’t look that great. As always, he shows heart,” said Atlas.

“It was life & death in some spots with Arreola,” said Atlas. “I think Ortiz, if Arreola could hurt him, Ortiz can hurt him. It should be interesting for a minute or more than a minute, maybe.

“You never know when Ortiz REALLY gets old. That’s kind of what we’re talking about, but it’s more interesting from the Ortiz side because a lot of people just kind of dismissed him [Ruiz] after that bad performance [in his loss to Anthony Joshua in December 2019].

“He [Ruiz] obviously lost the rematch, got way too heavy against Joshua, and then he goes and has this fight with Arreola with his new trainer [Reynoso]. People expected a lot, and they were disappointed. So a lot of people wrote him [Ruiz] off.

“This is an important fight for Ruiz to see if they write him back on, to see if he’s back in the mix again because it looks like he might have removed himself from the mix again. So this is more interesting to see what Ruiz does, and I think there’s interest for that reason,” said Atlas.

“I am training well. I know the effort that we are making for this fight,” said Andy Ruiz to the Los Angeles Times en Espanol about his September 4th fight against Luis Ortiz.

“I chose this fight myself. I knew this is what the people wanted,” said Ruiz about his belief that fans wanted him to fight the 43-year-old Ortiz.

“I didn’t want someone easy, someone that I was going to beat without balls. This fight is very important to me because it’s another one to become world champion again,” said Ruiz.

“Not all people,” said Ruiz when told that some boxing fans believe he’s lost his hunger for the sport. “They are looking at all the sacrifice that I’m making right now, all the work.

“Many do not know what we have in life. Bad and good things happen to everyone. But they look at us when we are not doing something that they don’t want; they’ll talk.

“We are well motivated, and I have to win this fight [against Luis Ortiz] to continue to win world championships. Right now, I’m very hungry, and I want to win this fight. That’s why we’re training hard.

“Everyone is going to doubt, and there are some that are going to support. If possible, I’m going to show you on September 4th that a NEW Andy has come. Well, the same Andy that won the championship [against Anthony Joshua].

“I’m not here to lose weight like I was in the other fight [against Arreola], and I’m here to win,” said Ruiz. 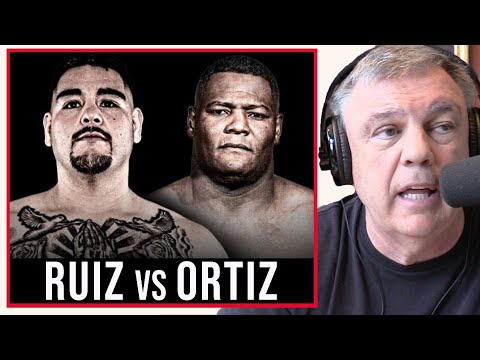 Shakur Stevenson says Lomachenko fight can happen at start of 2023 »