Ryan Garcia: “I’m determined to do something amazing”

By Dan Ambrose: Ryan Garcia wants to put on an “amazing” performance tonight againt Javier Fortuna on DAZN at the Crypto Arena in Los Angeles.

With the possibility of a fight against Gervonta ‘Tank’ Davis hanging in the balancce KingRy (22-0, 18 KOs), it’s essential that he puts in the type of performance tonight against Fortuna (37-3-1, 26 KOs) that will both excite the boxing public and persuade the promoters/handlers for the Baltimore native to make the fight.

The 23-year-old Ryan will be a little bigger weigh-wise than he normally is because Fortuna needed the weight for the fight to be adjusted to 140 lbs because he was a little heavy when he began training camp for their fight.

You can immediately see the differencce in Ryan’s physique with the muscle he’s put on for the fight.

He now looks like a fulfledged light welterweight, and it’s hard to imagine him returning to the 135-lb weight class if he makes short work of the 33-year-old former WBA super featherweight champion Fortuna.

Ryan will, of course, return to the lightweight division because there’s big money fights there for him againt WBA ‘regular’ champion Gervonta (27-0, 25 KOs) and against these fighters:

“So, we’re going to come in, throw punches and give the fans a great fight. That’s what I’m focused on. I’m done talking and ready to fight.

“People don’t give him credit because he’s never had one of those talented fighters when you look at it. He’s only had guys that were gritty, besides Corrales and obviously the Ruelas brothers,” said Ryan Garcia.

“But when you look at them, they didn’t really have out-of-this-world speed or power, but he knew how to make them fight out of their best ability. He [Goosen] did have Michael Nunn, sorry. Michael Nunn was a beast.

“That was probably the only really talented fighter he had. But it’s just amazing to show how great of a trainer he is and how he pays attention to everything, and he makes the best out of his fighters. I would say he’s the best trainer I’ve had.

“That was my first training camp where I wanted to be a showoff, and dog people in sparring and do what I got to do,” said Ryan when asked if he wanted to show off in front of Goosen when he first began training with him.

“But then I noticed, that’s stupid, and I don’t need to do that. I just need to focus on what’s going to make me better. Me dropping people and knocking them out it’s not going to do s*** for me.

“I’m not making no money beating up on sparring partners,” said Ryan. “Not trying to knock them [the sparring partners]. I just had no mercy. I didn’t care. When they did drop, I let them get up, and I dropped them again.

“I look a certain way, but I was raised in a certain atmosphere that I had to fend for myself. You had to be a dog. Where I grew up. It was brown and black culture. We always fought. I step into the locker room, and it’s on.  There’s nothing I can do about it. I can’t run away,” said Ryan Garcia. 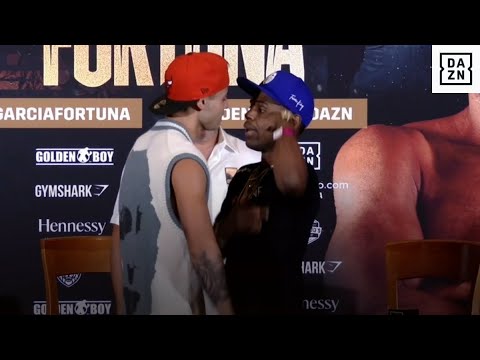