By Chris Williams: Floyd Mayweather Jr says he’s ready to make the Gervonta ‘Tank’ Davis vs. Ryan Garcia fight happen within the next 90 days, but it will require “sacrifices” on the part of Kingry.

Floyd wants Ryan to understand that he’s NOT the shot-caller, not the boss in the promotion, and he’s going to have to agree to a fight at 135, or he can move on down the road.

As such, it’s better for Ryan to understand that sooner rather than later because he will miss the boat if he keeps talking crazy about how Gervonta will come up to 140 to fight him.

Mayweather wants Ryan to know that in boxing, the challenger doesn’t call the shots against the champions, especially when that guy has NEVER won a world title.

Hence, the 23-year-old social media star Ryan will have to get off his high horse and accept the conditions for making the fight with the champion Tank (27-0, 25 KOs).

If Ryan keeps talking crazy about how Gervonta will come up to 140 to fight him at his weight, the fight isn’t going to happen. Ryan would then need to try to fend off the killers at 140, looking to collect his scalp and send him into Palookaville.

“We can fight in 90 days if you want. Whatever you want to do,” said Floyd Mayweather Jr to Fighthype about his readiness to make the Tank Davis vs. Ryan Garcia fight happen within the next three months.

“He’s [Ryan] going to get smoked by Tank]. I’m going to have Tank in the best shape of his life. Just know, when he hit that boy, he ain’t going to wake up until next year,” said Mayweather.

“I think confidence beats whatever people say. If he feels like he’s ready, he wants it, and knows he can beat him, then what do you know? It could happen, so you can’t underestimate those fighters,” said Andy Ruiz Jr to Fighthype about his view that Ryan Garcia can beat Gervonta ‘Tank’ Davis.

“I think he looked good. He looked explosive; he did what he had to do, and he fought a lefty,” said Ruiz about Ryan’s victory over Javier Fortuna last Saturday night. “He was first, he was last, and he kicked some a**.

“I don’t know. There’s always this or that, but I always stay focused on what I got to do,” said Ruiz when asked if Canelo Alvarez’s criticism about Ryan Garcia’s lack of worth ethic is true.

“We’re all hard-working men, and we all risk our lives to feed our families and feed our loved ones. I’m not here to talk bad about anything like that,” said Ruiz. 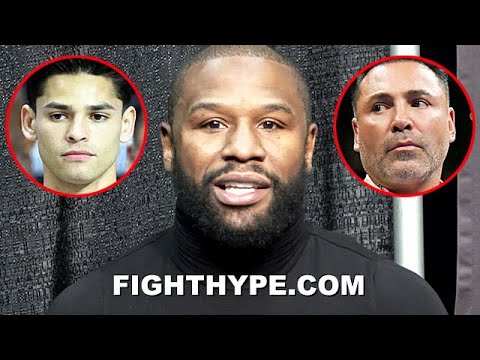