Vargas was knocked down in the ninth round by Magsayo, but not hurt. After the knockdown, Vargas came back strong to outbox Magsayo in the tenth, eleventh and twelfth rounds to get the victory. 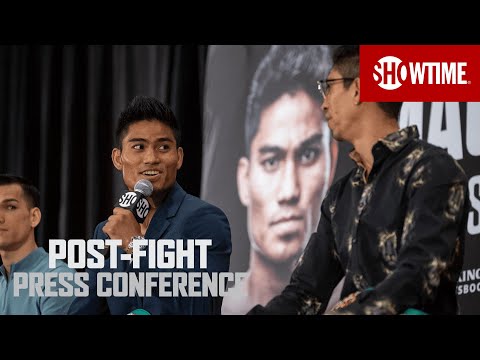 This is the 25-year-old Figueroa’s first fight since losing his WBA & WBC 122-lb titles to Stephen Fulton Jr. last November.

“The comparisons, you know, some people say, ‘Alright, every Filipino, now we’re going to talk about Pacquiao.’ That’s kind of what Pacquiao’s career did,” said Paulie Malignaggi to ProBox TV, talking about Mark Magsayo being compared to former eight-division world champion Manny Pacquiao.

“This one more so than anybody else that we talk about it because the opponent, Rey Vargas, trains with Nacho Beristain. He’s also a world-class fighter, and an ex-world champion at the junior featherweight limit.

“I don’t know how he was making junior featherweight at the time he was making it at 5’10” height. He’s coming in with a lot of credentials himself, so you have the built-in rivalry, Mexico-Philippines, started by the Pacquiao-Marquez rivalry, which everybody talks about.

“Because of that rivalry, you ended up having the Freddie Roach vs. Nacho Beristain rivalry as a trainer as well because a lot of Filipino fighters gravitate to Freddie Roach in the United States now.

“Of course, in Mexico, Nacho Beristain is royalty out of all the Mexican trainers that are internationally renowned and known. So you have a solid storyline here between two guys that can fight and have proven that they can fight.

“Magsayo knocked off Gary Russell. Gary Russell had been a champion for a long time. I don’t think he’d lost since the Lomachenko fight, which is ages ago and he’d been very impressive.

“My disappointment with Gary Russell is that I don’t think he got the most out of his prime. I’d like to see him fight more often than a once-a-year appearance,” said Malignaggi.

“I feel happy, full of energy, it’s a big jump, a big point. Where too many positive things can emerge and resurface,” Rey Vargas said to DAZN.

“Even if Magsayo is there and he’s good and undefeated, if he’s good I’m better.”