In the co-feature in a rematch of their 2021 fight, Israil “The Dream” Madrimov and former WBA interim World Super Welterweight champ Michel Soro ended in a technical draw due to a cut suffered by Soro.

In the first round, starting ten seconds into the round, there were twelve clinches with warnings from Referee Marcus McDonnell on several occasions. In the second round, Pulev started scoring well inside with right uppercuts and chopping rights to the chin of Chisora.

Twice Chisora almost hit referee McDonnel while breaking clinches. In the third round, Pulev dished out a beating on Chisora for the most part until the final minute when both were warned for hitting behind the head. The commentators are pro-Chisora.

In the fourth and fifth rounds, it was more of Pulev outscoring Chisora with uppercuts from both hands while Chisora was swinging wildly, landing few except to the body. In the sixth round, a clash of heads caused a cut on the left eyebrow of Pulev. Referee McConnell keeps warning Pulev for hitting behind the head. Pulev continued to outland Chisora.

In the ninth round, Chisora landed a right on the chin, hurting Pulev early in the first minute. Pulev would land half a dozen jabs before Chisora would come back with an overhand right to the chin.

In the tenth round, Pulev’s right eyebrow was cut. Later, referee McConnell warned Pulev after he landed a punch on the head for a foul. Pulev continued outscoring Chisora overall. Both landed punches after the bell.

In the eleventh round, Pulev continued having Chisora against the ropes trying to slip punches with little offense. In the final seconds, Chisora tried stealing a round which was his routine.

In the twelfth and final round, Pulev kept Chisora on the ropes until near the final minute when Chisora landed an overhand right, rocking Pulev. Pulev kept the jab in the face of Chisora, following with rights, with Chisora landing only one at a time.

The 41-year-old Pulev and the 38-year-old Chisora were spent at the end. The one-sided comments from ring announcers never stopped in favor of Chisora, who took too many punches overall staying on the ropes for the most part.

Ring entrances by Pulev to “Sweet Caroline” and Chisora’s “You Were Always on My Mind” set the stage. 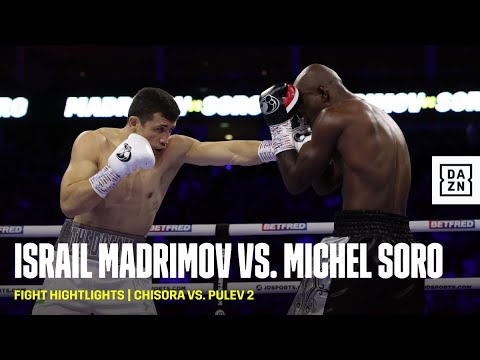 Madrimov took the first round, easily outscoring Soro. In the second round, after thirty seconds, a combination from Madrimov to the chin hurt Soro. Again with a minute remaining, he hurt Soro.

In the third round, a clash of heads caused by Soro seconds into the round caused a bad cut on the left side an inch from his left eyebrow, causing a stoppage by the ring physician. The referee was Steve Gray. It was a questionable early stoppage. 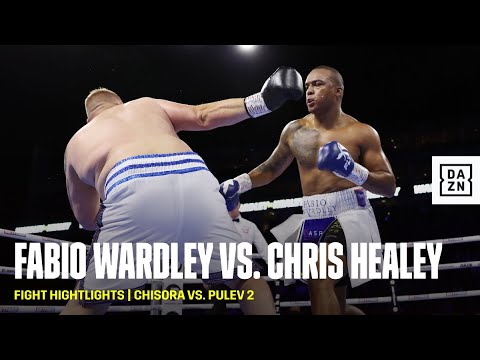 In the first round, Healey was outworking Wardley until the halfway point when Wardley had Healey against the ropes landing five unanswered punches, with the sixth a right on the chin, dropping Healey for an 8-count from referee Mark Healey managed to get to the end of the round. In the second round, two right uppercuts from Wardley on the chin dropped Healey to a knee while Wardley hit him again with a right as referee Bates called a halt. Promoter Eddie Hearn said Nathan Gorman, 19-1 (13), would be next for Wardley. 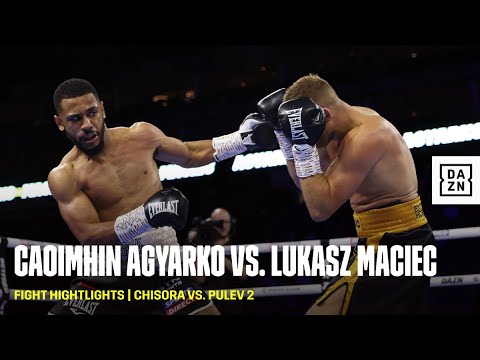 In the first three rounds, Agyarko outscored the aggressive Maciec, who landed his share of rights to the chin. In the fifth round, Maciec came out hands low, showboating a bit landing rights while Agyarko went to a body attack. With a little over a minute remaining, Maciec landed a right on the chin, stunning Agyarko.

In the sixth round halfway through, Agyarko turned southpaw the rest of the round outworking Maciec though getting hit with occasional rights on the chin. This was the first time referee Steve Gray had to break a clinch. Maciec was the aggressor, for the most part getting countered by Agyarko.

In the seventh round, Agyarko returned to orthodox, having his way for the most part until the final thirty seconds when Maciec landed a solid left hook to the chin seconds later, a right on the chin in a good round for Maciec. In the eighth and ninth rounds, Agyarko continued outscoring Maciec in a very entertaining bout. In the tenth and final round Agyarko didn’t go for a stoppage though outscoring Maciec who has never been stopped. The fans were pleased with this bout.

In the first three rounds, Ali used her hand speed to outland the ever-aggressor Rojas who got in her share of body shots. In the fourth round, Rojas could not cut off the ring as Ali moved well and countered well.

Rojas made it competitive in the fifth round, though not enough to win the round. In the sixth and seventh rounds, the fans started chanting “Ali, Ali” as Ali stood her ground more and had two good rounds outscoring Rojas two to one, going past the sixth for the first time.

In the eighth and final round, Rojas rushed out throwing punches in bunches, with Ali taking over after thirty seconds scoring well, and finishing with a shutout. The referee was Chas Coakley scoring it 80-72, as did this writer. Her last three fights had been in the US under trainer Manny Robles.

The ring Announcer was David Diamonte. 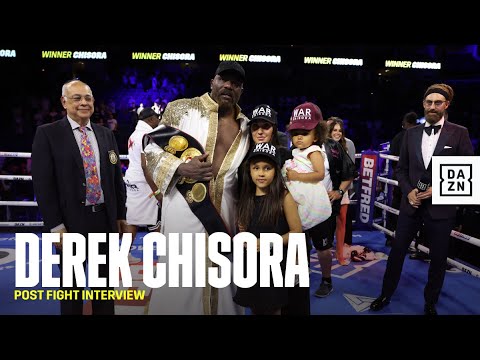 
« Eddie Hearn wants Chisora vs. Dillian Whyte next after win over Pulev