Joe Joyce ready for Usyk or Fury after beating Hammer

#1 WBO, #2 WBC Joyce put on a body punching clinic against Hammer, knocking him down four times in the contest before the match was halted in the 4th round by referee Victor Loughlin.

Joyce is ranked high enough with the World Boxing Organization to challenge the winner of the August 20th rematch between IBF/WBA/WBO champion Usyk and Anthony Joshua.

Getting a title shot against WBC champion Tyson Fury will be trickier for Joyce because ‘The Gypsy King’ has made it clear that he’s retired, and will only be lured back for huge money.

Given Fury’s focus on money, the only fighter that can bring him a tremendous payday is Joshua.

Joyce got Hammer out of there faster tonight than Fury did in his eighth-round stoppage victory in 2015.

“I’m still going forward, and I’m going to get to the top. I’m right there at the top of the rankings with the WBO & WBC, so it’s only a matter of time before I get them belts, them proper belts,” said Joe Joyce to Frank Warren’s Queensbury Promotions following his win over Christian Hammer.

“It’s great to have him back in the corner again. I’ve had three great training camps in Las Vegas, learning stuff and adding it to my arsenal.

“So yeah, I’m ready, I’m ready for the next stage,” said Joyce when asked if he feels he’s ready to challenge heavyweight champions Oleksandr Usyk or Tyson Fury.

“I’m at the top level now, so it’s only a matter of time while they sort out their fights. I’m there, ready & waiting

“He’s going to fight again on the 24th of September,” said Frank Warren about Joyce’s next match. “We’re going to sit down and work out some opponents between us.

“He [Joyce] took a few shots, and your heart is in your mouth,” Warren said.

“It’s exciting,” Joyce said about him getting hit a few times by Hammer tonight. 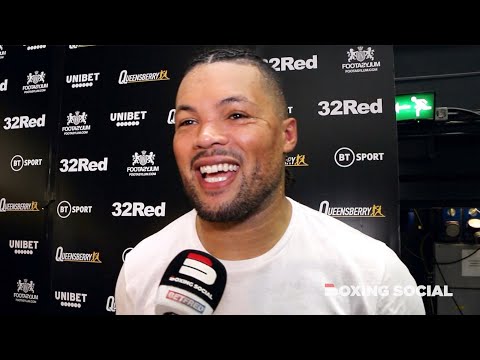 “It’s too exciting for an old geezer like me,” Warren continued. “It’s unbelievable and what a fight. I knew it would be a great fight while it lasted. What I said at the press conference, ‘War,’ and that’s what it would be.

“You know what? He’s got the ammunition to win the war and he did it,” said Frank.

“It’s that ring rust that boxers have to work through,” said Joyce in answering a question about why he was hit so frequently by Hammer in the first two rounds.

“Early on, you don’t really know where the punches are coming from. So it takes a little bit of time to get used to it. I don’t mind taking shots, but I prefer not to take shots. So I need to go back to the drawing board a the gym and work on my defense, and then it’s on to the next one.

“It’s good that I’ve had this one now. It’s great to be back out,” said Joyce.

“A lot of things have been going on, and he’s come back and shook those cobwebs out and actually shook the heavyweight boxing scene. That’s for sure,” said Warren in talking the ‘Juggernaut’ Joyce.

“I noticed the body shots were working. [Trainer Ismael] Salas was telling me to go to the body, and talking me through some of the shots throughout the fight,” said Joyce.