“He’s going to get beat up by a singer, a musician, a seashell collector, a YouTuber. I’m all these things.” – Paul

“I’m here to end this façade that he’s calling a career.” – Rahman Jr.

New York – July 13, 2022 – Jake “The Problem Child” Paul and Hasim Rahman Jr. didn’t waste any time expressing their dislike for each other during a heated and at times frenzied press conference on Tuesday, vowing to knock the other out ahead of their cruiserweight clash scheduled for eight rounds on Saturday, August 6 live on SHOWTIME PPV (9 p.m. ET/6 p.m. PT) from Madison Square Garden in New York City. Tickets went on sale at 1 p.m. ET on Tuesday and can be purchased at www.msg.com. The press conference was streamed live on the SHOWTIME SPORTS YouTube channel and Jake Paul’s YouTube channe 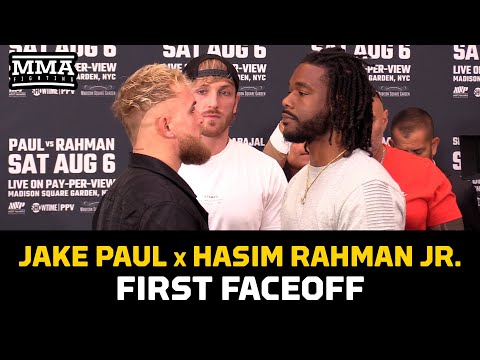 For the first time in his colorful and storied career, Paul (5-0, 4 KOs) will take on a full-fledged boxer in Rahman Jr., who is 12-1 with six knockouts, had around 100 amateur fights and has been trained by such greats as Emanuel Steward, Calvin Ford and now Yoel Judah.

Just four months after her epic match with Katie Taylor at Madison Square Garden, Brooklyn’s seven-division world champion Amanda “Real Deal” Serrano will return to the same venue and to her natural weight to defend her Featherweight World Titles against the hard-hitting Argentine Brenda “La Pumita” Carabajal co-headlining the event on August 6.

Serrano was on hand on Tuesday and said she was looking forward to fighting at 126 pounds after she fought Taylor in April at 135. Rounding out the SHOWTIME PPV undercard are separate bouts involving two of the sport’s most exciting prospects — unbeaten knockout artist Brandun Lee (25-0, 22 KOs) and quick-fisted Ashton Sylve (7-0, 7 KOs).

The press conference was hosted by the combat sports expert Ariel Helwani, who guided the heated back-and-forth discussion between Paul and Rahman Jr. Their animosity stems from sparring sessions they held before Paul’s first two fights in 2020 and who got the upper hand in that action. Rahman claims he only used one hand in the sparring in an effort to work with him. Paul referenced leaked footage of their sparring in which Paul appears to land a number of heavy blows to demonstrate the action was heated and not at all controlled. Rahman Jr. claims the footage was edited to make Paul look good.

The subject of Paul’s boxing resume also came up with Rahman stating that Paul built his career off of pummeling former MMA and NBA athletes. “That’s why your next on the list,” Paul responded. “That’s why I’m fighting you.” Hasim Jr. was flanked on the dais by his famous father, the former two-time heavyweight champion, Hasim Sr., who rose to prominence knocking out Lennox Lewis in 2001 in South Africa to become the unified titleholder. Paul referenced Rahman Sr., saying he wouldn’t be able to fight his son’s battle on August 6.

“You’re not in the ring sir,” Paul said. “And that’s what your son doesn’t understand. He thinks he’s you and that’s his biggest mistake and on August 6 I’m ending the legacy that your whole family has.”

Here’s a sampling of what the participants had to say at Tuesday’s press conference: 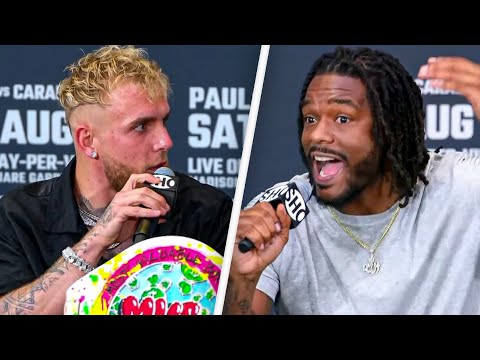 “He’s going to get beat up by a singer, a musician, a seashell collector, an amateur, a Disney boy, a YouTuber, I’m all of these things.”

“I beat him in sparring and he knows that too. We have the footage.”

“We know he’s going to come out southpaw so it’s me fighting a southpaw for the first time. But other than that, nothing really changes in my preparation. I spar professional fighters in the gym all the time, two to three times a week for the past three years, guys way better than him, so nothing really changes. We’re prepared for this.”

“You got beat (in sparring) and you know it.”

“This is 100 percent a tougher fight (than facing Tommy Fury). This is what I do. I take hard challenges and challenge myself more and more and increase the level of opposition and give the fans what they want. People say fight a real boxer – here we go. This guy is bigger than me, he has more experience. There’s no reason that I should win this but I’m proving to the world and proving to the kids out there that if you truly put your mind to something and you’re dedicated, then you will win.” 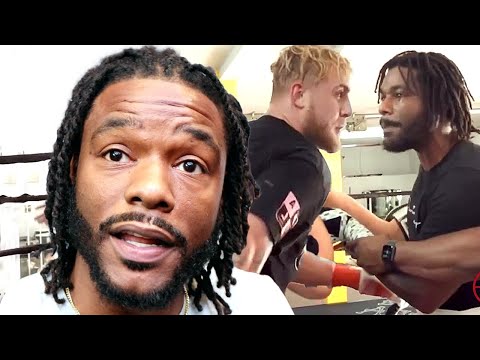 “This is such a huge opportunity for me. I never once second-guessed or even doubted the outcome of this fight.”

“I’m the one giving you credibility. None of your other opponents gave you any credibility.”

“I’m here to end this façade that he’s calling a career so we’re going to see on August 6th Jake Paul fall. You’re definitely going to see that.”

“They put the footage that they want to put out. Did you put out footage where you turn around and ran away from me in the ring? You turned your back and ran. You’re going to see on August 6th.”

“Who have you fought? You haven’t fought anybody. You fought champions in the NBA and MMA but no boxers.”

“I will be using both hands on August 6. I only used one hand when I sparred him. He can’t even spar anyone with one hand. He’s not even on my level. I boxed this man with one hand behind my back and I promise you he turned his back and ran from me. I was trying to help you. He’s definitely barking up the wrong tree. I’m going to mess you up.”

“I think that I haven’t reached my full potential yet and that I can definitely have performed better in all of my fights, so on August 6 we’re going to come fully prepared.”

“I’m not worried about the weight. I was just in camp for a fight and then I got right back into the gym. The weight is not a factor. I’ve fought at 200 pounds for years in the amateurs, so losing the weight is exciting for me. It will open some doors for me in the boxing ring.”

“I’m truly honored to have such a fast turnaround. The fight with Katie Taylor was a huge event, not just for females but for boxing in general. I’m super happy to be back at MSG with my manager Jake Paul and we get to show the world that we’re fighters and he gets to take off his promoter turtleneck and put on his boxing boots to show that he’s a fighter as well.”

“These (featherweight belts) are my babies. I work super hard for these belts. I went up to 135 my last two fights to get this fight with Katie Taylor. I’m not a legitimate 135-pounder. I’m a featherweight and that’s why I need to defend these titles and after this one it’s onto the next one against the other champions.”

“Jake Paul is fighting Hasim Rahman Jr. for a reason. We’re so much alike in the game of boxing, and I know he has all the heart and courage to go out there and do it. He’s training as if he’s fighting for a world title, so I have all the faith in his work ethic and he has that hammer and that hammer can neutralize any opponent.” 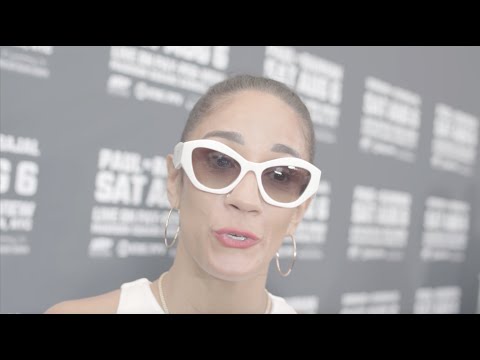 “I’m excited like everyone else. I just don’t know how I’m going to feel when Jake’s 100 million fans hate my son (when he beats him). They’re going to hate him.”

“I think he’s been disrespectful (looking past my son) because – Jake is a real fighter and we respect that. I just think that he’s moving too quick. I think he picked the wrong guy at the wrong time.”

“Jake could have taken an easier touch. But that’s not him. After Tommy Fury pulled out of the fight, Jake went looking for an even bigger challenge and they found a tougher challenge than they probably should have taken, someone who’s bigger than Jake, more experienced as an amateur, more experienced as a pro. Why take a fight that almost everyone around you is telling you not to take? Well, there’s one reason, Jake Paul is on a mission to prove himself as a credible professional boxer. And what he’s doing is unprecedented.”

“Strip away his celebrity status and his success as a content creator and what he’s striving for is no different than any other professional boxer. It’s no different from what Hasim Rahman is striving for – for credibility and respect, working to improve his skills and to put it all on the line on one night in front of a massive crowd here at The Garden.”

“Vasiliy Lomachenko did something similar, he headlined the Garden in his sixth professional fight at 5-1. But Jake’s doing it one fight sooner, headlining a Pay-Per-View event, and doing it without the benefit of 400 amateur fights and two gold medals. What Jake is doing is remarkable. But more importantly, you can’t call what he’s doing a hobby or a fad or a stunt. This is a full-time profession for Jake, a full commitment, boxing is now his calling card and No. 1 pursuit.”

“Jake clearly moves the needle like no one else and we at SHOWTIME are proud to be in business with him and he’s clearly bringing the sport to a new audience. The same can be said of Amanda Serrano, who inspires multitudes of young girls every time she fights. We’re proud to have Amanda back on SHOWTIME. We’re proud of our history with women’s boxing and proud to have Amanda back for a fifth time.”

“We here at The Garden are incredibly honored to host this fight between Jake Paul and Hasim Rahman Jr. Jake is an incredibly great partner. He’s really into the business of boxing and he’s a real supporter of women’s boxing, but we also know that Jake is into boxing himself and he’s really passionate about it, and I’m sure he’s in tremendous shape.”

“I want to welcome Hasim here and I want to personally thank you for stepping up quicky and stepping down in weight and we appreciate everything that you’re doing.”

“You’re following in your father’s footsteps who fought here and won in 2004.”

“The promotion we had with Amanda and Katie a few months ago was tremendous. It was historic. It was one of the greatest nights of boxing that we’ve ever had here at The Garden. Amanda is one of the best people, boxers, that I’ve ever worked with. She’s just been tremendous and we know that she’ll be ready.”


« Tim Tszyu on Jermell Charlo: “I want to cause him pain”