By Huck Allen: Promoter Eddie Hearn says he has doubts that Ryan Garcia will beat Javier Fortuna this Saturday night in their headliner on DAZN at the Crypto Arena in Los Angeles.

In his last two fights against Emmanuel Tagoe and Luke Campbell, Ryan didn’t look so good. That might be why Hearn believes the former WBA super featherweight champion Fortuna can win.

Unlike Ryan Garcia, Fortuna doesn’t have millions from endorsement deals, and he doesn’t have 8.9M followers on Instagram or 1.2M subscribers on YouTube.

Fortuna is still hungry and wants to win badly on Saturday because a victory over Ryan could open the door for him to challenge WBA ‘regular’ lightweight champion Gervonta ‘Tank’ Davis or undisputed champion Devin Haney next.

Ryan Garcia is already wealthy, with a reported net worth of $10 million from his endorsement deals. To better put that number in perspective. IBF/WBA/WBC welterweight champion Errol Spence has a net worth of $7 million, and Terence Crawford at $8 million.

The fighter Ryan Garcia talks about wanting to fight 24/7; Gervonta Davis has a reported net worth of $4 million. These are world champions, and yet Ryan is wealthier than them.

“I haven’t seen a lot of Fortuna, but if he’s the same fighter he has been, I think it’s going to be a very tough night’s work for Ryan Garcia. I don’t think, and I’m only watching Ryan Garcia at the gym like a lot of fans are, I’m not so sure [he beats Fortuna].”

If Ryan loses to Fortuna, it will be a significant blow to his career and be a massive disappointment for Golden Boy Promotions and DAZN.

Ryan is being put into a position to become a star in the sport, and obviously, Fortuna has been well-vetted by his handlers to make sure he’s not a threat. But even with an older fighters seemingly past their prime, they can still surprise young lions when they’re motivated.

Fortuna is like an old landmine, still highly dangerous, buried for eighty years in the ground, waiting to explode on Ryan this Saturday night.

“I’m not so sure this fight plays out so easily as some people think it’s going to play out on Saturday, which is great news. So make sure you tune into DAZN to watch it because it’s going to be a great fight.

“Yes, absolutely,” said Hearn when asked if he’ll be impressed if Ryan Garcia scores a big knockout against the 33-year-old Fortuna. 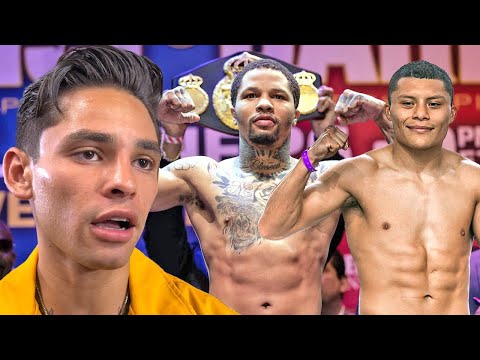