Errol Spence reacts to Rolly Romero asking for a fight: “Something wrong with buddy”

By Adam Baskin: Errol Spence Jr. reacted to Rolando ‘Rolly’ Romero calling him out last Saturday night, saying that there is “something wrong” with him.

It seems unlikely that the former lightweight world title challenger Rolly (14-1, 12 KOs) will ever get a title shot against Spence or any of the 147-lb champions, for that matter.

For Rolly to get a chance to battle for a belt at welterweight, he would need to beat the top ten contenders at 147, and he doesn’t appear skilled enough to do that.

Rolly was firing insults at IBF/WBA/WBC welterweight champion Spence on Saturday night, calling him “droopy-eyed” and “googly-eyed” in calling him out.

Rolly is taking the YouTuber approach to big-money fights by talking his way into the rather than earning them by fighting high-caliber opposition.

It’s pathetic that Rolly talked his way into a title shot against WBA ‘regular’ lightweight champion Gervonta ‘Tank’ Davis on May 28th after just 14 fights as a professional.

You don’t often see fighters getting title shots with only 14 fights under their belt, particularly when their opposition is as poor as the type Rolly has fought.

Some stuff don’t need a response.. something wrong with buddy 💀😂

Talking himself into a title shot won’t work at 147 for Rolly because champions like Spence and Terence Crawford want to fight good opposition, and they won’t want a guy that was just knocked out by Tank Davis.

If Rolly does move up to 147, he can earn himself a title shot if he defeats these contenders:

Those would be tough fights for Rolly, and it’s debatable whether he could beat any of them. While Rolly’s power was excellent for the 135-lb division, at 147, he’s not going to bowl these fighters over with his shots in the same way.

“I don’t give a f*** about Frank Martin. I’ll tell you like this. I have no problems with Frank Martin. I actually like him as a person. Me and him are cool. We sparred, and he’s a great fighter. But honestly, I’m a f**** star, and I’m going to go and fight another f**** star.

“I want Errol Spence. Why am I going to go? No, no, no, listen to this. Errol Spence went over there to promote another fighter that he had signed. F*** that s***. I’ll go after big fish. I’m moving up to 147, and I’m going to get Errol Spence,” said Rolly. 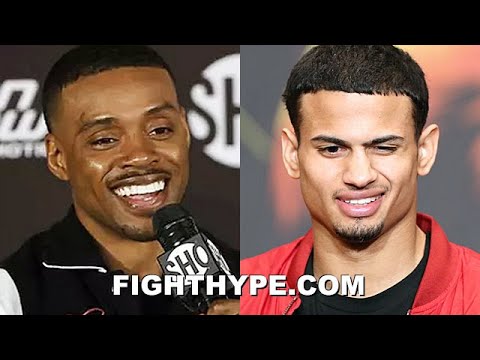 
« Ryan Garcia: “I just care about fighting Tank, making a bunch of money”