By Adam Baskin: Eddie Hearn says he could have an announcement for Conor Benn’s next fight this week. It WON’T be Chris Eubank Jr. or Mikey Garcia, though.

If it’s not Thurman, the most probably opponent for the 25-year-old Benn is former WBO light welterweight champion Maurice Hooker (27-2-3, 18 KOs).

Hearn has been eager to put a fight together between Benn and the 32-year-old Hooker for over a year now.

Hooker has lost 2 out of his last three fights and hasn’t fought in 16 months since losing to Vergil Ortiz Jr. by a seventh-round knockout in March 2021.

It’s believed that Hearn is keeping Benn in a holding pattern until the 147-lb titles are vacated by the winner of the Errol Spence Jr. vs. Terence Crawford undisputed fight. Benn will go after one of those belts when they’re vacated.

The clever Matchroom promoter Hearn has been feeding Benn strictly older fighters consisting of this bunch:

It’s thought that Hearn has protected Benn like the valuable Hope diamond because he’s the replacement for Matchroom flagship fighter Anthony Joshua as the next money-man for the company.

“No, not that I’m aware of,” said Conor Benn to iFL TV when asked if he’s fighting Chris Eubank Jr. next. “I swear I saw something where they were adamant that I was fighting Mikey Garcia. Where did they pull that one out from?

“It’s nice they keep my name in their mouth. Just that he thinks I’m great, and he’s enjoying the journey, so which is nice,” said Benn when asked what Barry Hearn of Matchroom Boxing has been speaking to him.

“When I first walked into the office to where I am now am a completely different man.”

“Everyone said that they presume he’s fighting Eubank,” said Eddie Hearn. “I think we’ll have it out to you by the end of this week. There are no negotiations; we’re not close to Eubank.

“Of course, that fight is always massive. I’m talking to Kalle [Sauerland] this week. Our focus is on other fights other than Eubank. Listen, I’m not saying I wouldn’t take that fight, but that’s not close or on the horizon,” said Hearn.

“I’m not planning on fighting anymore. I had a good career, I’m happy with everything, and it’s time to move on,” said Mikey Garcia to Boxing Social.

“I never heard of that,” said Mikey when asked if he was ever asked to fight Conor Benn. “That’s something social media had. I never heard any word about it directly, so I don’t know what they’re talking about. But I have no plans on fighting now; I’m good,” said Mikey.

NEWS:   Eubank Jr vs. Benn could be sanctioned by the Luxembourg Boxing Federation 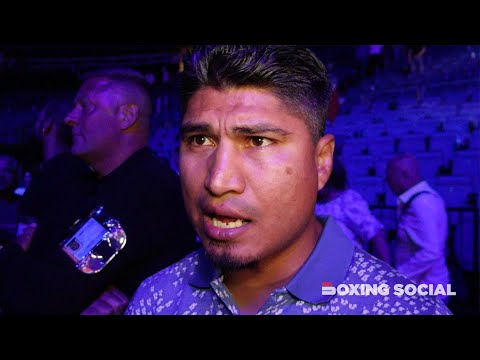 
« Does Chisora deserve a massive payday after beating Pulev?

Will Any of The Young Talents Be Champs? »