Hearn feels that it might not be enough for Joshua (24-2, 22 KOs) to try and outpoint Usyk like last time because that didn’t work.

If Joshua goes down that street again, he would be taking a calculated risk that could backfire on him.

We saw last time that Joshua came out second best in virtually every round against the superior boxer Usyk when he was trying to match him skill for skill.

Joshua has a new trainer in Robert Garcia, and he has multiple plans that he’ll quickly rifle through on August 20th if things aren’t working for the 32-year-old.

“Canelo is not the only fighter coming off a loss at the end of this year in a super fight that you’ll be in the middle of. Obviously, I’m talking about Joshua and Usyk. That fight having been made now, we got a firm date and we’re back in Saudi,” said Radio Rahim to Secondsout about Anthony Joshua heading into a rematch with Oleksandr Usyk.

“Joshua, having a new trainer, was the date a concern to give him more time with [Robert] Garcia?”

“People don’t realize that Joshua has been working with Robert Garcia since December. He’s been in full camp for a long time. Would the extra three or four weeks, will it help? Maybe. But he was ready to go on July 23rd, and he’s ready to go on August 30th.

“He’s in great shape, and Robert is buzzing, especially with Bam Rodriguez’s performance, his victory during the weekend. Everyone is really confident,” said Hearn.

It’s his [Joshua] second loss. You’ve been down this road before. The first one was a huge shock for everybody, not that this wasn’t a surprise, but a more contentious fight. You could see how it would go that way,” said Rahim.

“The mentality of Joshua having experienced the loss [to Andy Ruiz Jr] and come back and avenged it and once again having to do the same. In this case, there’s less confidence that he wins the second fight.

“Most people thought he would beat Ruiz the second time out,” said Rahim on Joshua having an easier task against the out-of-shape 283-lb Andy Ruiz Jr. than he will against the well-trained Oleksandr Usyk in their rematch.

“AJ wasn’t really right for the Ruiz fight. He was right for the Usyk fight, but he just got beat by the better fighter. With the Ruiz defeat, he could say, ‘I really wasn’t right. I got caught. I didn’t recover. I shouldn’t have lost but I did.’

“You can’t say, ‘I shouldn’t have lost against Usyk’ because you did, and he outboxed you.’You came in with the wrong game plan, and the better technical boxer won on the night.’

“So that’s been almost a little more difficult for him to digest because he’s had to go away, improve and come back with a better game plan. People said when he lost to Ruiz, ‘You shouldn’t fight Ruiz again. You should come back, rebuild.’

“Now people say about the Usyk fight, ‘You shouldn’t fight Usyk again.’ This guy [Joshua] has a stellar resume and he only wants to fight the best fighters in the world.

“This was the only fight that he was interested in, but he does have to change and he has to change against a pound-for-pound great. It’s not like some people say, ‘He just needs to be more aggressive. He just needs to come on and let his hands go.’

“It’s not that easy against a great like Usyk, but certainly he does need to do a lot of those things. It’s very difficult for him to overcome it. He’s in a great place physically & mentally, and all truly believe he’ll win this fight and he needs to do so for his career,” said Hearn.

“In Usyk’s case, he knows what we’re all talking about, and he knows the adjustment that Joshua will likely make,” said Rahim.

“What do you know about the adjustment that Usyk will likely make to that, and how dangerous of a fight is it really? Joshua is obviously your man, but this is a huge dangerous fight.”

“It’s one of the great heavyweight fights. Not just of our generation, but of all time,” said Hearn about the Joshua vs. Usyk II rematch. “When we were out there in Saudi last week, it feels like ‘Rumble in the Jungle,’ ‘Thrilla in Manilla.’

“When you see the scenes in Saudi, it’s got that kind of feel to it, and it’s a must-win heavyweight fight [for Joshua]. You’re right, Usyk has the ability to adapt to all kinds of styles, but he doesn’t like the physicality.

“He [Usyk] doesn’t like to get hit, particularly to the body, and it’s no secret that AJ has got to be more aggressive in the fight. It’s not just more aggressive.

“Robert Garcia made a good point about you almost need game plans 1, 2, and 3, and you need to be able to adapt during the fight because Usyk is very, very good and very smart.

“He’s [Joshua] got to be more aggressive in the fight, and he knows it’s a must-win. I truly believe he’ll knock him out. He’ll stop him in this fight because he has to.

“I don’t think he can afford to just outbox him and outpoint him. He’s got to be aggressive and I think he’s got to try and knock him out,” said Hearn about what Joshua needs to do for him to defeat Usyk.

“Lastly, Tyson Fury having retired, which is hard for any of us to believe, and he’s already talking about what it might take for him to return. The winner of this fight looms heavy,” said Rahim.

“I don’t think Tyson Fury will fight again if Usyk wins, but I think if AJ wins, and I believe he will, then I think we’ll see the undisputed fight between those two,” said Hearn. “That’s why AJ’s taking this fight.

“He wants to force the undisputed fight. It’s always been his dream to be undisputed, and he can’t do that without the belts. So he takes this rematch and he does everything to be a three-time world champion,” said Hearn about Joshua.

“Objectively with your estimation, with these three guys, Usyk, Joshua, and Tyson, let’s assume he’s active, who is the top heavyweight in the division?” said Rahim.

“You’re asking a very biased individual,” said Hearn. “I’m a big believer that Anthony Joshua is the best heavyweight in the world, but right now on paper, you can’t say it.

“I actually think with the resume, and obviously he’s only had a couple of heavyweight fights, having beaten AJ, having come up undisputed cruiserweight world champion, I got a lot of criticism when I talk about Tyson Fury’s resume, the fact is that his big wins have been against Deontay Wilder three times, but one individual and Wladimir Klitschko.

“So I put AJ’s resume consistently as better than all of them at heavyweight, but on paper, it’s a toss-up between Usyk and Fury for #1 right now. Hopefully, that’ll change on August 20th,” said Hearn. 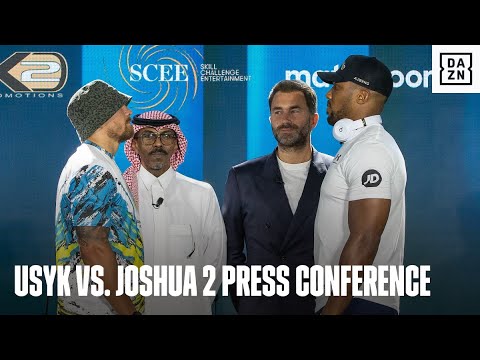 
« Canelo Alvarez focused on Golovkin & Bivol fights, nothing else

Joe Joyce ready for Fury or Joshua vs. Usyk 2 winner next »