Alexei Lezin the Man Who Beat Both Klitschko’s!

By Ken Hissner: Before getting to the man who beat both Klitschko’s in the amateurs, let’s take a look at the former world heavyweight champion Klitschko who had an interesting career in both the amateurs and the professionals.

Vitali “Dr. Ironfist” Klitschko, 45-2 with 41 knockouts and was born in 1971 in Belovodskoye, Kyrgyzstan. He was 195-15 in the amateurs.
Vitali lost in three tournaments, first in 1994 in the World Cup in Thailand to Svilen Rusinov of Bulgaria 10-9, then in the Military World Championships, gaining a Silver medal losing to Alexei Lezin of Russia 10-1 in Tunisia, and in 1995 at the World Championships in Berlin, Germany, gaining another Silver medal again losing to Lezin 12-3.

Finally, in 1995 at the Military World Championships, he won a Gold Medal defeating Lezin 10-6 in Ariccia, Italy.

Wladimir, in 1993, won a Gold Medal at the Junior European World Championships in Saloniki, Greece, defeating Serguei Lopatinski of Russia 5-2.

In 1996 Wladimir, at the European Championships in Vejle, Denmark, he lost in the finals to Alexei Lezin of Russia 6-1 receiving the Silver Medal.

Wladimir won the 1996 Olympic Gold Medal in Atlanta, Georgia, defeating Lexin in the semi-final and Paea Wolfgramm of Tonga 7-3. At the same games, Vitali was suspended from the Ukrainian team when he tested positive for a banned substance (steroids for an old kickboxing injury) for two years. He planned to box at super heavyweight. Wladimir, who was struggling to make heavyweight, took over at super heavyweight.

Getting back to the man who beat both Klitschko’s www.boxrec.com only shows an amateur record of 34-9 but defeating impressive names like Lance “Mount Goofi” Whitaker twice, future world champion Nikolai Valuev of Russia, Vitali two out of three, another future world champion twice in Siarhei Liakhovich of Belarus who was the WBO champion. He also defeated 2000 Olympic Gold Medalist Audley Harrison of the UK in 1999, only to lose to him at the Olympics in 2000.

Lezin would end his career after losing to Harrison, defeating Alexander Povetkin three years later in 2003 before Povetkin won the Olympic Gold Medal in 2004 in Sydney, Australia. He was born in 1973 in Poselok Energetik, Russia. He lost in both the 1996 Olympics to Wladimir and the 2000 Olympics to Harrison. He never turned professional. 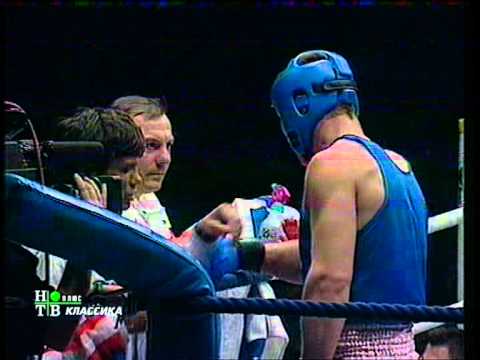